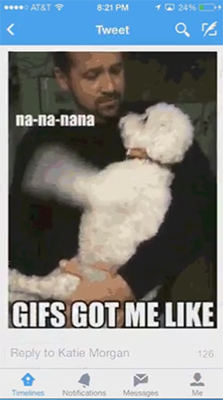 The latest Twitter update provides native support for animated GIFs on Twiiter.com, as well as Android phones and iPhones. In the past users had to use third-party platform Giphy in order to display animated GIFs in their Twitter posts. But with the Twitter update, users can now upload GIFs directly from their devices. However it seems that the clips won't automatically play (unlike the video clips in Instagram), so you will have to press the play button before they play.

Join HWZ's Telegram channel here and catch all the latest tech news!
Our articles may contain affiliate links. If you buy through these links, we may earn a small commission.
Previous Story
Gamevice MFi Game Controller Could Maximize Gaming Potential of Your iPad Mini
Next Story
Meet Amazon's 3D Display, Feature-rich Smartphone: The Fire Phone