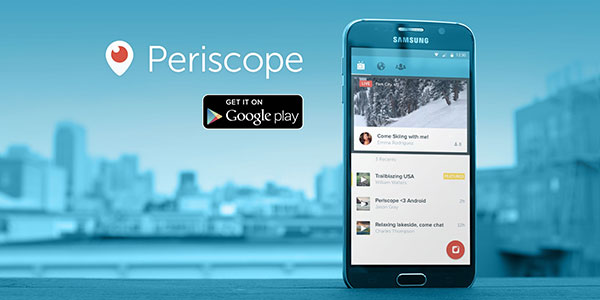 At long last, live-streaming app Periscope has come to the Google Play Store. Periscope first made the headlines when it was acquired by Twitter over rival streaming app Meerkat, the latter of which is already available for Android and iOS. The previously iOS-only Periscope added a new dimension to Twitter, conferring a new and more engaging visual dimension to Twitter’s real-time feed.

Periscope for Android supports Android 4.4 (KitKat) and above and has most of the features that are familiar to iOS users, with a few additional goodies that are unique to Android. As on iOS, Android users will be able to start a public or private broadcast, restrict comments from non-followers, and interact with a broadcaster by chatting or sending hearts.

However, these notification settings apply globally, so it’s not yet possible to control notifications for specific people you follow.

Furthermore, Android users will gain a useful “Resume” function which allows them to pick up where they left off in case they have to leave the app to take a phone call or answer a message.

Periscope is available for free on the Google Play Store now.

Join HWZ's Telegram channel here and catch all the latest tech news!
Our articles may contain affiliate links. If you buy through these links, we may earn a small commission.
Previous Story
Jawbone sues Fitbit ahead of Fitbit's planned IPO
Next Story
Linksys announces new WRT1200AC dual-band AC1200 router