Twitter Fleets are ephemeral tweets that disappear after a day

Twitter Fleets are ephemeral tweets that disappear after a day 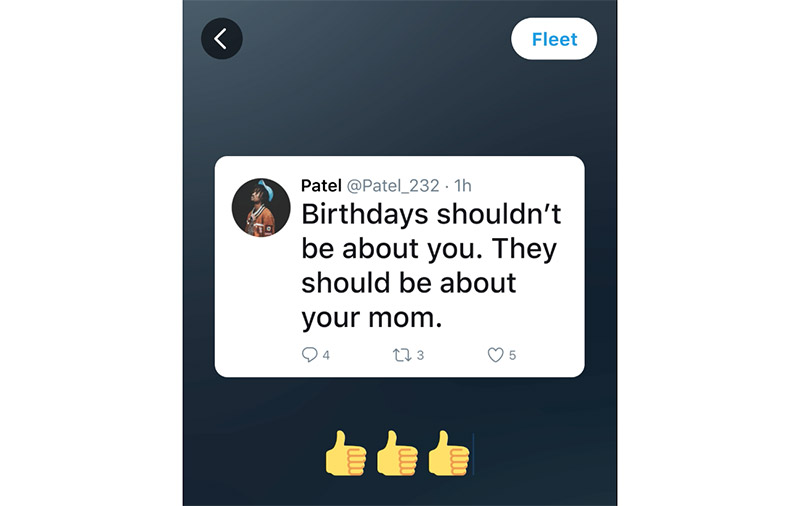 Twitter has announced that it’s rolling out a new Fleets feature to users worldwide starting today.

First tested in Brazil, Italy, India, and South Korea, Fleets are fleeting tweets that show up at the top of the home timeline and they disappear from view after a day.

To ‘fleet’, all you need to do is to tap the Share icon at the bottom of a tweet, followed by ‘Share in Fleet’. Anything can be fleeted: text, reactions, photos as well as videos. You can also customise a fleet with text and emojis. Twitter says stickers and live broadcasting will be added soon.

Anyone who can see your full profile can see your fleets. If you’ve direct messages enabled, anyone can reply to them, too. Similarly, if you want to reply to someone’s fleet, you can send them a DM or emoji.

Twitter, on the motivation behind making these ephemeral tweets:

Through our tests in Brazil, Italy, India, and South Korea, we learned Fleets helped people feel more comfortable joining the conversation – we saw people with Fleets talk more on Twitter. Those new to Twitter found Fleets to be an easier way to share what’s on their mind. Because they disappear from view after a day, Fleets helped people feel more comfortable sharing personal and casual thoughts, opinions, and feelings.

Join HWZ's Telegram channel here and catch all the latest tech news!
Our articles may contain affiliate links. If you buy through these links, we may earn a small commission.
Previous Story
Here are the top 100 Shazamed songs of all time
Next Story
Belkin unveils TrueFreedom Pro wireless charging pad and UV sanitiser