Twitter on the desktop is now prettier and easier to use

Twitter on the desktop is now prettier and easier to use 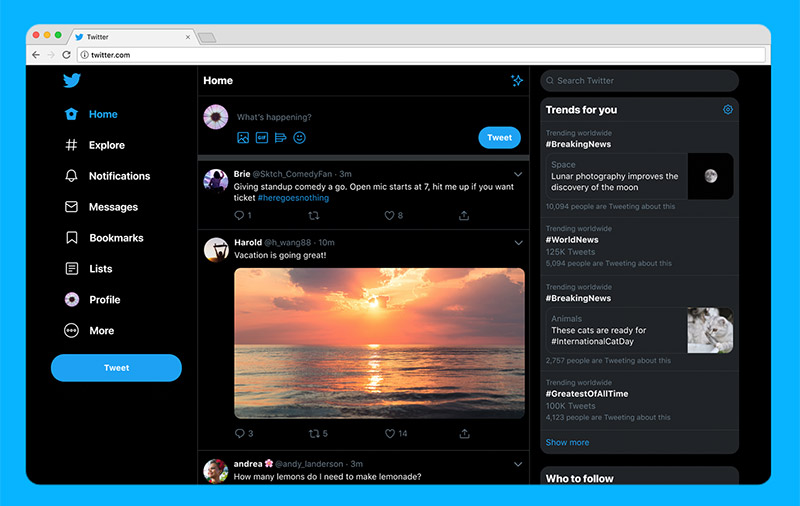 After months of testing, Twitter has announced that it’s rolling out a new design of Twitter.com starting today.

According to the social networking service, the update aims to make Twitter on the desktop faster, easier to navigate, and more personalized.

One of the more obvious visual changes is that the navigation bar that’s used to be at the top is now on the left sidebar, along with the Explore tab. Like the Explore tab in the Twitter mobile app, here’s where you’ll find “live video and local moments personalized for wherever you are in the world”. The Bookmarks, Lists, and Profile tabs are all accessible from this left sidebar, too.

Direct Messages (DMs) are also expanded to let you see your conversations and messages in the same window. There are new themes and color options as well, including two new dark mode options. Finally, if you’ve multiple accounts, there’s now no need to log out and log in just to switch between them.

The new Twitter.com should appear for all users over the next few days. According to Mashable, you can’t opt out of this change.

Join HWZ's Telegram channel here and catch all the latest tech news!
Our articles may contain affiliate links. If you buy through these links, we may earn a small commission.
Previous Story
AI helps Visa prevent more than US$25 billion in fraud annually
Next Story
The upcoming Honor 9X is expected to feature a triple rear camera setup and the Kirin 810 processor