Twitch just got a brand new logo and UI

Twitch just got a brand new logo and UI

Twitch has a brand new look, but it actually isn't that much different from the old one. The streaming platform today rolled out a revamped UI for its website and an updated logo, all while keeping the same core features and branding.

The main change to the logo comes is in the new shade of purple. Of course, Twitch wasn't going to ditch its iconic purple, but it's updated it to a brighter and more energetic hue.

However, purple is now a lot less prominent on its website. It's mostly present in hyperlinks and the Twitch logo at the top. Instead, the company will make use of a wider palette of colours moving forward, and it says you can expect its apps or advertisements to be more colourful. On top of that, it's giving streamers a new tool called Creator Color that lets them pick a specific colour to represent themselves and their brand.

This colour will then show up as a coloured accent around their channel thumbnail, on message notifications in chat, or alongside subscriptions. Streamers can also modify the Twitch logo or glitch if they want, since the company specifically designed the colours to play nice with its new shade of purple. 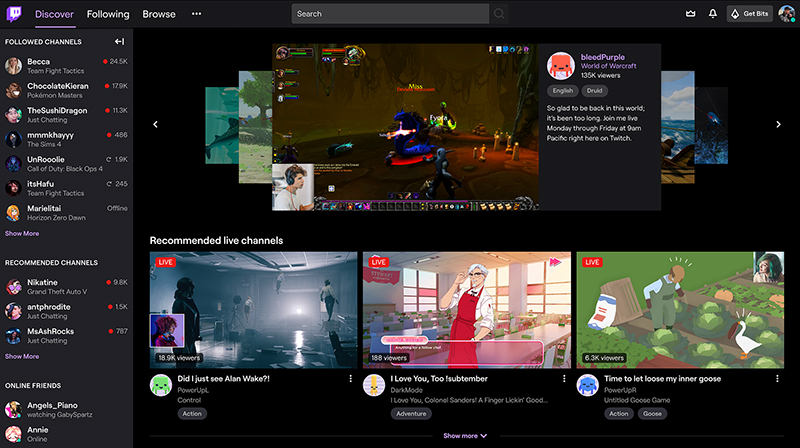 Elsewhere, the new website UI is now cleaner and more modern than before. Recommended videos and categories now span your screen from edge-to-edge, and you can scroll through them more easily to discover new streamers.

There's a new typeface here too in the form of Roobert, a sans serif font Twitch says was modeled after the retro Moog synthesiser logotype.

The redesign comes ahead of TwitchCon, which runs from 27 to 29 September in San Diego, California.

Join HWZ's Telegram channel here and catch all the latest tech news!
Our articles may contain affiliate links. If you buy through these links, we may earn a small commission.
Previous Story
Go wall-to-wall with Jabra’s new panoramic 4K webcam
Next Story
Microsoft's Project xCloud Preview is now open for sign-ups