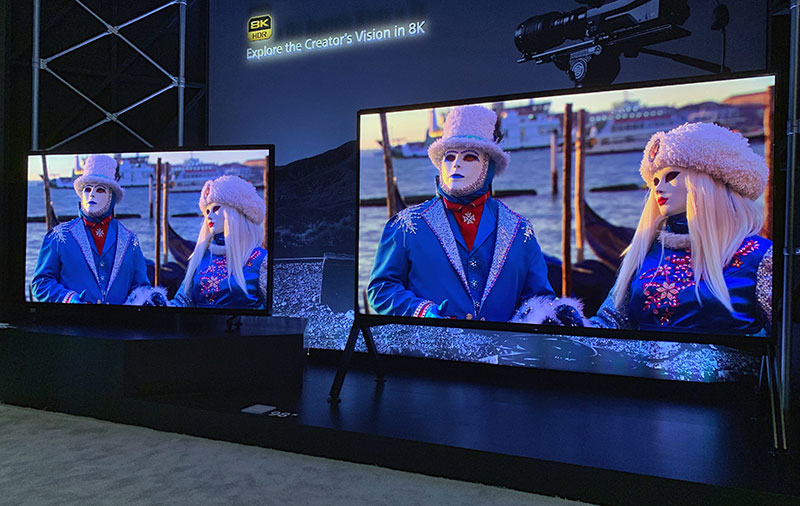 Sony wasn't kidding when they talked about bringing the big screen experience to your living room. At CES 2019, the Japanese company has announced its latest Master Series LED-LCD TV, the Z9G, which is an 8K TV available in 98-inch and 85-inch screen sizes.

Both Z9G TVs are powered by Sony's X1 Ultimate processor, the same chip found on the current Master Series A9F OLED and Z9F LCD TVs. One key difference is that the chip on the Z9G has a proprietary algorithm to manage the 8K resolution. Not too unlike what Samsung's Quantum Processor 8K is doing to its 8K QLED TVs, Sony's X1 Ultimate is able to analyze the different parts of the picture and tweak them intelligently when upscaling. Sony says an exclusive 8K database that provides texture and character information is used to allow the Z9G to enhance images to close-to-true 8K quality.

The Z9G also offers up to 20 times the contrast of conventional LED-lit LCD TVs thanks to Sony’s 8K X-tended Dynamic Range Pro technology, which precisely balances the light output across the screen. The use of Backlight Master Drive technology allows for control down to the individual LED module, allowing for incredible accuracy. It goes without saying that both the 98 and 85-inch Z9G TVs use full-array local dimming backlighting.

The Z9G also brings great acoustics to match the visuals, with an Acoustic Multi-Audio system that includes four front-facing speakers placed optimally at the top and bottom of the TV, simulating sound from the center of the screen so visuals and audio are perfectly aligned. Like the current Master Series TVs, if you've your own external speaker setup, you can configure the Z9G's built-in audio system to act as your speaker setup's center channel.

The Z9G also features a Netflix Calibrated Mode, which lets you enjoy Netflix shows the way the studio evaluation masters intended without you doing any extra calibration. There's support for HDR10, HLG, Dolby Vision (and Dolby Atmos after a firmware update), and IMAX Enhanced too (the latter is yet another new home cinema standard).

Like past Sony Bravia Android TVs, Google Assistant is built into Z9G, so you can use it to control your connected devices with just your voice. Chromecast functionality is also built-in. Apple's AirPlay 2 and HomeKit are the newest additions: the former lets you effortlessly stream content from your iPhone, iPad, and Mac to the big screen, the latter enables you to add the TV to the Apple Home app so that you can include it in scenes or automations with other HomeKit accessories.

Connectivity-wise, my understanding is that both 8K TVs support full-spec HDMI 2.1, which means you can expect all the HDMI 2.1 goodies such as eARC and high frame rate support (e.g. 8K at 60fps, 4K at 120fps), variable refresh rates, and an automatic low latency mode for gaming. (Update: There's no VRR and ALLM.)

Singapore pricing for the Z9G series have yet to be announced, but you can find out more from the product page here.

If 8K TVs are overkill for you, Sony has also announced new 4K LCD TVs, and leading that charge is the X95G.

Available in 85, 75, 65, and 55-inch screen sizes, the X95G features a full-array local dimming backlight system, uses the X1 Ultimate processor, has the new Acoustic Multi-Audio system with “sound positioning tweeters”, and runs Android TV 8.0. It too has a Netflix Calibrated Mode and supports IMAX Enhanced and Dolby Vision/Dolby Atmos content. It also supports AirPlay 2 and HomeKit.

Also coming to Singapore is the X85G. Powered by a vanilla X1 processor and available in 85, 75, 65, and 55-inch screen sizes, this is an LED edge-lit TV that doesn't support Dolby Vision, but will support Dolby Atmos after a future firmware update. The X85G also supports AirPlay 2 and HomeKit.

Join HWZ's Telegram channel here and catch all the latest tech news!
Our articles may contain affiliate links. If you buy through these links, we may earn a small commission.
Previous Story
Sony’s latest PS-LX310BT turntable lets you listen to your records on wireless headphones
Next Story
Sony jumps into immersive audio with its new 360 Reality Audio technology