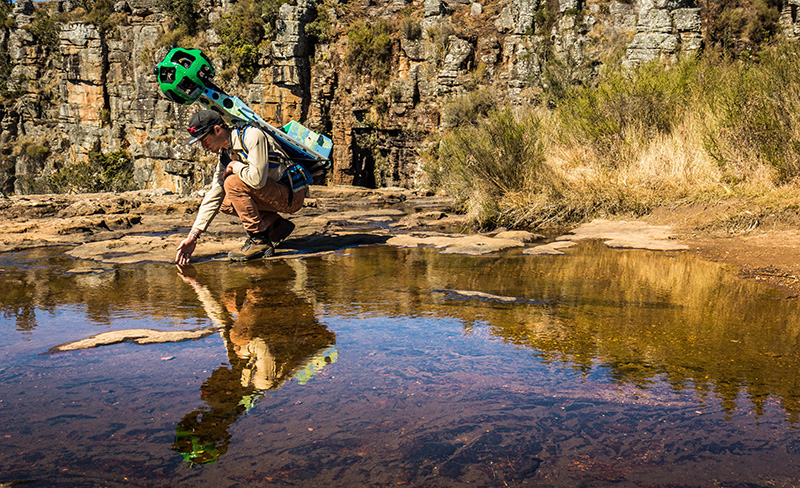 If you’ve ever wanted to trek through South Africa, here’s your chance to do so from the comforts of your own home – thanks to Google Street View. Over the last 12 months, a team of more than 200 South African volunteers have been trekking through the nine provinces of South Africa with a Google Trekker camera strapped to their back, mapping out National Parks, nature reserves, and hiking trails as they walked.

A total of 900km was trekked on foot, with over 50,000km travelled over the 12-month duration. Lions, cheetahs, elephants and other wildlife were also encountered (and hence captured), and over 232 points of interest were recorded. This includes seven of South Africa’s eight UNESCO World Heritage Sites so you can now visit sites like and iSimangaliso Wetland Park, the Drakensberg Mountains, and Mapungubwe Hill at your convenience.

The team of volunteers was coordinated by Andre Van Kets, founder of Drive South Africa, who saw the potential to showcase South Africa to the world when applying to the program.

“The Trekker camera is a 22kg custom-made backpack fitted with 15 cameras pointing in all directions. The on-board technology plots the camera’s exact location on the trail. While recording, the camera takes a 360-degree photo every two-seconds. It’s basically the off-road equivalent of Google’s Street View cars, so for the first time, travelers and wildlife lovers from across the globe, can explore the full spectrum of South Africa’s diverse wilderness areas on Google Maps and Street View.”

For ease of use, Drive South Africa has launched a microsite with the main sites of interest presented in 360 images that you can click and drag your way through. Otherwise, you can try searching for the various points of interest in Google Maps itself.

For more, check out the video below. Happy exploring!