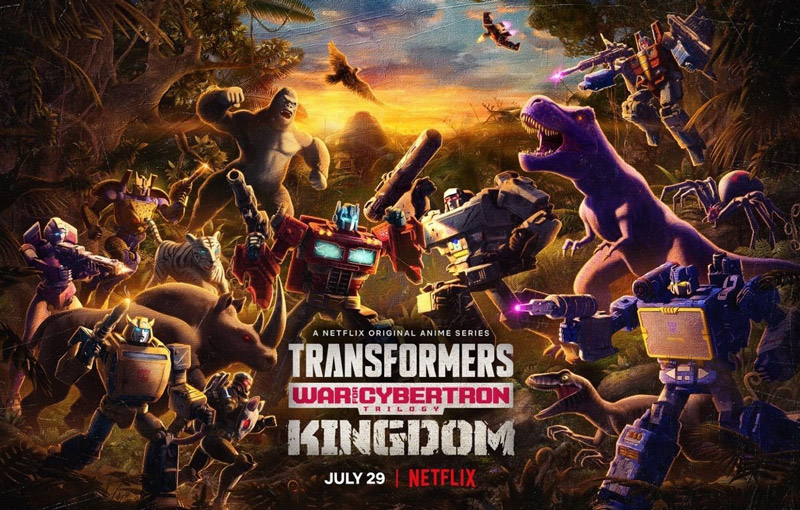 The horribly titled Transformers: War for Cybertron - Kingdom has been revealed via a new trailer, which shows off the final showdown between the Autobots and Decepticons. Kingdom will conclude Netflix’s War for Cybertron trilogy, capping off a story that began with the fall of Cybertron by bringing in characters from the fan-favourite Beast Wars series.

Where the story last left off, Megatron and Optimus Prime’s battle for the Matrix of Leadership led them to a strange and alien world - which has turned out to be a primal version of Earth. This leads into the introduction of characters from the 90s series Beast Wars, which coincidentally is also where the live-action films are going next.

Beast Wars was originally set during an era long after the fall of Autobots and Decepticons, with its story following their descendants the Maximals and Predacons. These four factions rarely shared the same screen in Beast Wars, but Kingdom is changing that in a big way. Optimus Prime and Optimus Primal are fighting together here, but while the Autobots have gained new allies, so too have their enemies.

Now the Autobots must team up with the Maximals to confront the Decepticons, who have joined forces with the Predacons, in the race to find the missing AllSpark. However, the Predacons are in control of the Golden Disk, a mysterious artifact which has a personal connection to Megatron and gives him an untold advantage over his enemy, Optimus Prime. Which faction will triumph in the final battle that will decide the fate of Cybertron's future?

It looks like the War for Cybertron trilogy is trying to cram in as many characters and factions from Transformers lore into one cohesive timeline, so this seems like a great way to get caught up on the franchise. Hopefully, Kingdom sticks the landing when it begins streaming on 29 July.

Join HWZ's Telegram channel here and catch all the latest tech news!
Our articles may contain affiliate links. If you buy through these links, we may earn a small commission.
Previous Story
Apple may consider acquiring media company Hello Sunshine for $1 billion
Next Story
Netflix's Witcher prequel Blood Origin casts Michelle Yeoh as a sword-elf