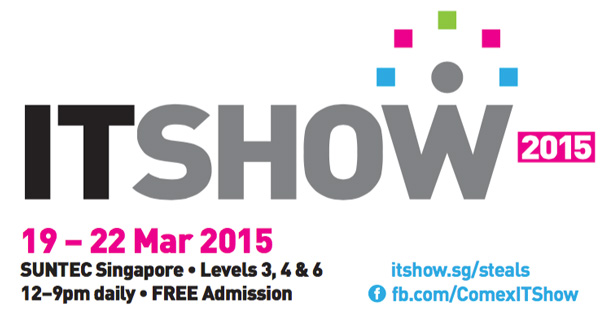 Updated on Mar 16, 2015: Added more details of the various events at the show.

IT Show 2015 happens next week, from March 19 to 22, at Suntec Singapore. We’ve already amassed some deals that are happening at the show, so if you’re looking for ideas on how to spend your Chinese New Year angbao money, do check it out.

But don’t just go to IT Show, buy some things, and leave. There are actually a lot of other things going on, from a tech showcase to a booth babes contest. There's also a way to get cash vouchers to add to the savings that you’re already getting at the show.

In brief, here are some highlights:

Have old or faulty laptops, tablets, or smartphones you want to get rid of? There’s a program at IT Show that lets you trade them in for cash vouchers to spend at the show. All IT Show cash vouchers come in denominations of S$10, and are accepted by most major brands and exhibitors, except M1, Singnet, ViewQwest, banks, credit card, and insurance companies. You can find out the terms and conditions here.

Many hot new products will be shown at the Tech Showcase corner (at Level 4), including Lenovo’s new Yoga Tablet 2 Pro and ASUS’ Transformer Book Chi, a series of super-slim 2-in-1 Windows hybrid notebook/tablet devices. You can also try out Google Glass, Parrot MiniDrone Rolling Spider, the MYO gesture control armband, and more.

Are you a gamer? If so, why not test your skills at the Gauntlet gaming stations at the Age of Gaming section (Level 4), and win some prizes? At the end of the first three days, the male and female participants with the highest scores will be rewarded with PlayStation collectibles and a chance to battle it out on the final day for the Grand Champion prize of a Sony PlayStation 4! Also, anyone who completes the Guantlet will receive a lucky draw chance to win from more than 20 gaming items such as keyboards, gaming headsets, and a PlayStation Vita.

You can also look out for Singapore’s best DOTA 2, Street Fighter, and Counterstrike players, who will be competing with one another in the Alpha Cup.

And at the Marketplace, you get to see a wide range of gaming products from brands such as ASUS, Logitech, MSI, Minecraft, Roccat, Razer, SteelSeries, and Prolink. There are also instant prizes to be won at the carnival games.

Events are also planned for at the stage daily, and these include booth babes strutting the runway with the newest gadgets, and exhibitors like HP, Casio, MyRepublic, ASUS, Lenovo, and Dell demoing their latest and greatest. Visitors also stand to win prizes in easy-to-win stage games and activities.

Also new this time round is an auction that’s happening daily at 5pm. Visitors who spend a minimum of S$100 can try their luck at the Stage on level 4 to bid for their favorite gadget. To participate, visitors will need to redeem an auction bidding ticket from the Organizer’s Office on level 6. Seats are limited daily, so be sure to come early. Items to be auctioned off include a Samsung Galaxy Note Edge 4G+, Parrot MiniDrone Rolling Spider, Lenovo Yoga Tablet 2 Pro, and more.

Did we say there are many booth babes at IT Show 2015? There will be a selfie contest where you can upload selfies to Facebook and Instagram (with hashtag #itshowbabes) and stand a chance to win S$300 in cash. You can also vote for your favorite booth babe when they are the runway at 2pm and 6:30pm daily. We heard that Lenovo has specially flown in two models from Taiwan to participate!

Here's an IT Show 2015 flyer for those interested to know more: 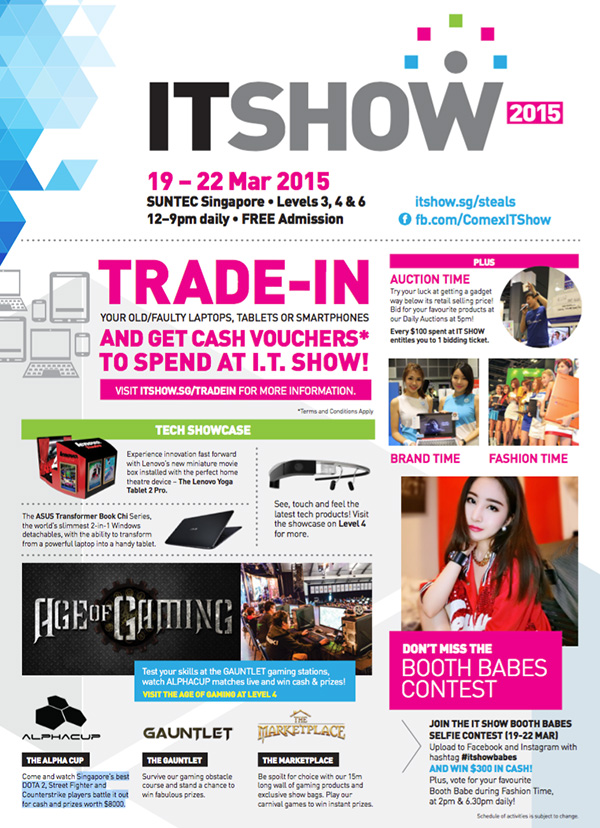 Previous Story
The Razer Blade Pro reforged
Next Story
Get yours if you haven't, Google will stop selling Nexus 5