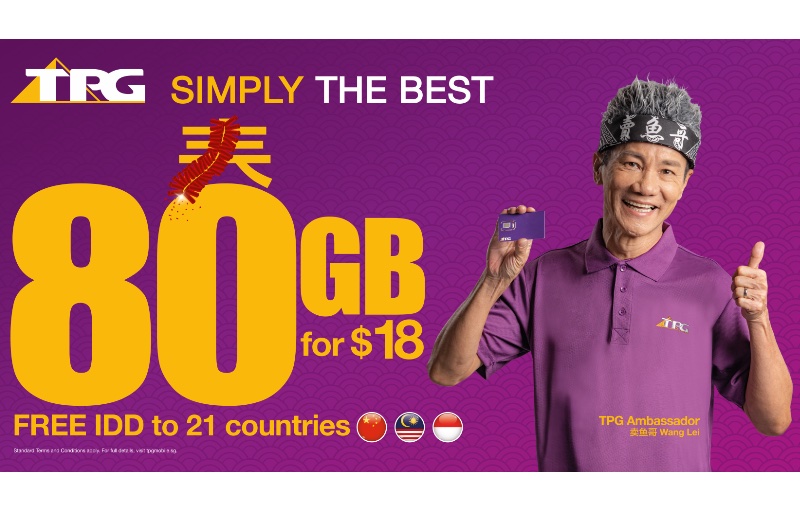 TPG has unveiled a SIM-only plan for heavy data users looking to maximise their time online.

The plan gives subscribers for 80GB of data at 4G speeds for S$18. In addition to the data, they also get 500 minutes of local outgoing calls, 50 free SMS, and 300 minutes of international direct dialling (IDD) calls to 21 countries. Included is also free 2GB of high-speed data roaming in selected countries as well.

For users who require additional IDD call minutes, TPG also offers one of the lowest IDD rates with charges in 30-second blocks. These rates can be found here.

TPG says that the 300 IDD call minutes to 21 countries is ideal for users who need to connect with families who live abroad in areas without stable Internet connectivity.

Unfortunately, as of now, unused data cannot be rolled over to the next month, neither are there plans to allow this.

Data speeds while using the 80GB will be at 4G data speeds. Exceed that, and there will be a charge of S$1 per 1GB exceeded. Best of all, speeds won’t be throttled at all.

Should subscribers exceed data usage beyond the first free 2GB of data overseas, they will be charged S$3 per 1GB for the excess.

More information on this is available here, along with other excess charges for local and overseas calls.

Any interested users can sign up for the $18 for 80GB SIM-only plan from various TPG outlets and at tpgmobile.sg. The plan will also be available on the new TPG SG app from February 2021 onwards.

A year of heavy usage

The past year has seen a spike in data usage as most people watched more online content and had video calls. in response to this, Singapore telcos have made changes to their data plans for subscribers with the majority providing more data to them. Even the Singapore Government came up with a plan for seniors so they wouldn't be left behind.

Join HWZ's Telegram channel here and catch all the latest tech news!
Our articles may contain affiliate links. If you buy through these links, we may earn a small commission.
Previous Story
A 'Dunk & Egg' Game of Thrones prequel is in the works at HBO
Next Story
A thinner, lighter MacBook Air with MagSafe may launch later this year