Toyota Releases Jailbreak Only iPhone Theme, Then Takes it Down

Toyota Releases Jailbreak Only iPhone Theme, Then Takes it Down 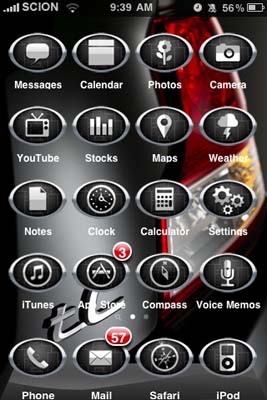 Recently, through their ad agency Velti, Toyota decided to release an jailbreak only iPhone theme that seemed to break a major taboo in catering to a very odd market segment. In the US, jailbreaking has been made legal, so Toyota's ad may have seen like a logical extension. Unfortunately, it would seem Apple has taken a not so understanding view and has asked Toyota to pull it. To keep things nice with the Cupertino company, Toyota has agreed and so the theme is no longer available.

modmyi.com - Apple also heard about the theme and ad campaign. I received a call from our contact at Velti this evening as well as an email asking me to please take the theme out of Cydia. On the phone, he explained Apple had contacted Toyota and requested they remove the theme and stop the advertising campaign. They (Velti) in turn contacted me relaying the message. The reason Velti listed for the removal request of the theme emailed through our dev portal was "Toyota’s making us take it down…" Toyota had agreed to do so to "maintain their good relationship with Apple," our Velti contact told me on the phone.

Join HWZ's Telegram channel here and catch all the latest tech news!
Our articles may contain affiliate links. If you buy through these links, we may earn a small commission.
Previous Story
Sony Might Delay New PlayStation Portable NGP Due to Quake
Next Story
NVIDIA Empowers Designers and Engineers With the Quadro 400 GPU