Toshiba Memory will rebrand itself as Kioxia by October this year Kioxia Holdings Corporation has begun operations on 1st October 2019 as its former brand name of Toshiba Memory is relegated to history. The new corporation has a new logo with silver as its corporate colour, and it denotes superiority of its memory technology. Kioxia Holdings also unveiled its new communication colours of light blue, magenta, light green, orange, yellow, and light grey. According to Kioxia, the vibrancy of the colour palette represents their passion to create new experiences with their memory products for a “colourful future for the world.” The company has also kicked off its #FutureMemories brand campaign to celebrate its new beginning.

Toshiba Memory Holdings Corporation will change its name to Kioxia Holdings Corporation on 1st October 2019. Its new name Kioxia (kee-ox-ee-uh) is an amalgamation of two roots words in Japanese and Greek respectively, i.e., kioku is Japanese for “memory” and the Greek word for value is “axia”.

According to the management’s statement, Kioxia Holding hopes to “uplift the world with ‘memory’” as our memories make up the “foundation of our vision.” In 2017, Toshiba parent company completed its sale of its memory business to a coalition of companies that include American private equity Bain Capital.

With the impending name change, it appears the new firm wants to break away from its Toshiba heritage. The company will also unveil the new branding logo to reflect its name change by the end of the month. Here’s the list of companies that will be affected by the name change. 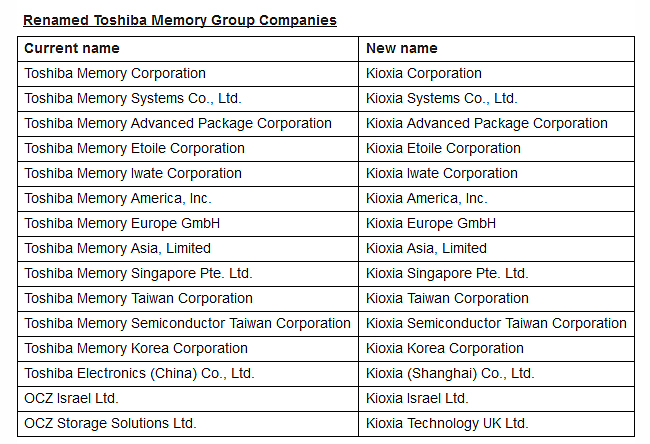