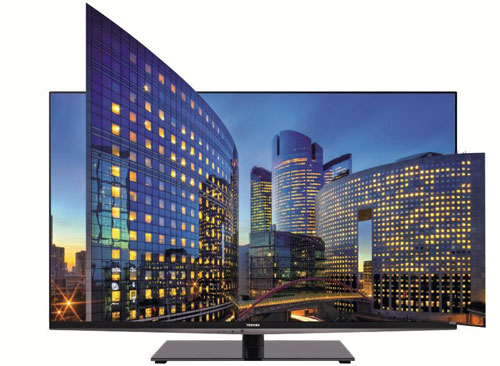 Passive 3D is gaining momentum as more industry players such as LG and Panasonic are now placing their bets on this polarized tech. Next of that list is Toshiba, who've unveiled their new flagship WL968 series of LED-backlit televisions at IFA 2012 over in Berlin, understandably packed with similar passive 3D features. The WL968 will be available in 47-inch and 55-inch sizes.

Besides its passive stereoscopic perks, the WL968 will feature edge LED backlighting, four HDMI slots, and two USB ports with DVR capabilities. Another lure of the WL968 is its integrated wireless benefits, which include conventional Wi-Fi as well as Intel's peer-to-peer wireless display, otherwise known as WiDi. According to HDTVtest's report, Toshiba's premium 3D sets will be equipped with their own Smart TV platform (Toshiba Places) too. On top of that, four pairs of polarized 3D glasses will accompany the WL968.

Although Toshiba has yet to release any polarized 3D TV displays in Singapore, the Japanese CE maker has since dabbled in all three major 3D TV technologies, pertaining mainly to active-shutter, passive/polarized, and glasses-free variations. For instance, the passive 47-inch 47TL515U was released in the U.S. market sometime last year although this particular model never quite made its way to our local shores. The very expensive and glasses-free RZ1 was announced here three months ago.

Toshiba's decision to push ahead in the passive 3D direction is understandable. Polarized 3D eyewear are not only cheaper to manufacture, but their flicker-free aspect makes them more comfortable on the eyes compared to the active-shutter alternative as well. What's more, users are not required to replace any batteries or having to recharge them occasionally. The active-shutter camp, however, might appeal to those who relish its superior 3D resolution, while glasses-free 3D TVs are typically costlier to manufacture, plus they're also plagued by very tight "sweet spot" issues.

The WL968 series is slated to arrive in the UK later this year, and rest assured we'll keep you posted if Toshiba decides to ship these passive 3D screens here.