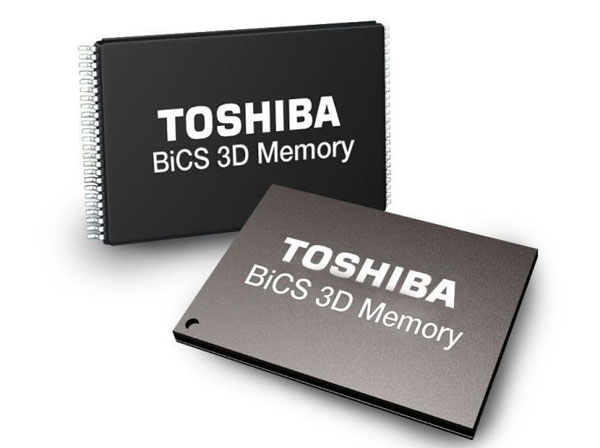 The new 3D NAND also abandons the conventional floating gate design utilized in 2D NAND in favor of a Charge Trap Flash (CTF) design that traps electrons with an insulator to prevent interference with adjacent cells. NAND floating gates leak more with smaller process nodes, and as these have continued to shrink, manufacturers have needed to find new ways to reduce electron leakage.

3D NAND represents the next step in flash memory development as manufacturers try to meet the growing demand for higher capacity devices and storage solutions. Smaller process nodes were one way to achieve higher density solutions with 2D NAND which only scaled in a planar direction, but the smaller nodes also came with trade-offs like decreased reliability.

But with the vertical stacking of 3D NAND, manufacturers have the freedom to fall back on larger and more reliable process nodes to achieve the same flash densities. As a result, it's not surprising to see Toshiba highlight that the new BiCS architecture brings some performance enhancements and will improve the reliability of write/erase endurance and boost write speeds. It is also suitable for use in a broad range of applications, from consumer to enterprise SSDs.

Toshiba has said that it is currently getting ready for mass production at the No. 2 semiconductor fabrication facility (Fab2) at the Yokkaichi joint venture facility in Japan. Fab2 is now under construction and is slated for completion in the first half of 2016, with the aim of meeting growing demand for flash memory.

In the meantime, SanDisk has said that pilot production will commence in the second half of 2015, with meaningful commercial production targeted for 2016, which should be when the new Fab2 facility will open. With that said, the next two years certainly look like they are shaping up to be exciting times for faster, higher-capacity and more reliable SSDs in the consumer and enterprise space.