Top 15 app publishers in the U.S. saw downloads drop a whopping 20% on average

Top 15 app publishers in the U.S. saw downloads drop a whopping 20% on average 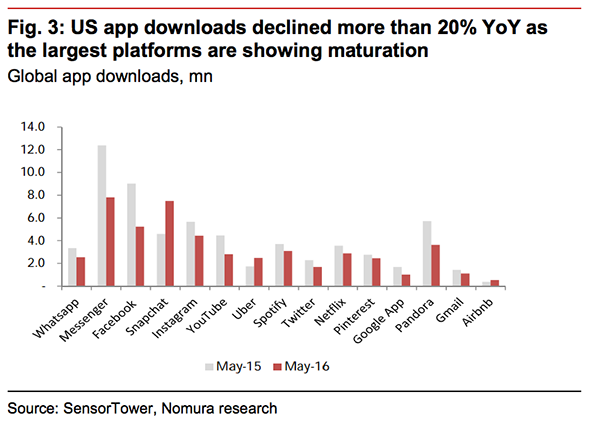 According to numbers from Nomura, the top 15 app publishers in the U.S. saw app downloads drop an average of 20% year-on-year in the month of May alone.

Out of the top 15 app publishers in the U.S., only two managed to come out unscathed, and they are Uber and Snapchat. The two apps still experience tremendous growth.

Even more shocking is the finding that "the average U.S. smartphone user downloads zero apps per month."

It seems then that the smartphone market in the U.S. is pretty saturated at this point, and whoever owns a smartphone has had one for a while now and already has all the apps that he or she needs.

That said, this doesn't mean that it's all over for app developers. Outside of the U.S., app publishers still experience positive, albeit modest, growth.

In addition, download numbers don't give a full picture of a business. Facebook, for instance, already have 1.65 billion downloads - in other words, over 20% of the world's population - at which point it's hard to find new users.

Join HWZ's Telegram channel here and catch all the latest tech news!
Our articles may contain affiliate links. If you buy through these links, we may earn a small commission.
Previous Story
ASRock will launch its new Intel X99 Fatal1ty and Taichi boards in July
Next Story
"Major iTunes overhaul" to debut at WWDC 2016