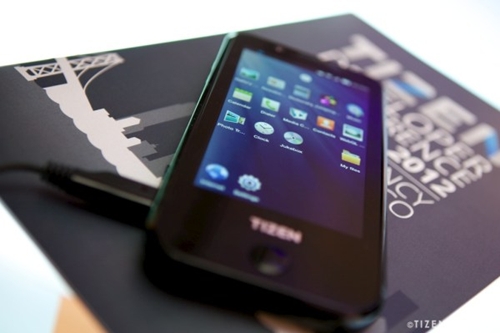 The release of developer phones generally indicates the arrival of a new operating system (OS) in the coming months, and in this case, we are looking at Tizen.

Several companies at the 2012 Tizen Developer Conference held in San Francisco were spotted using reference devices provided by Samsung for demos. Looks wise, the Tizen developer unit resembles the Apple iPhone with a circular home button at the bottom of its 4.65-inch Super AMOLED display.

Not surprisingly, the Tizen 1.0 user interface has the look and feel of Google Android though the animations and transitions found in today's mobile OSes are notably absent. It also has basic support for social networks such as Facebook and Twitter.

The Linux Foundation and the LiMo Foundation announced the launch of Tizen in September 2011 as a new Linux-based open source mobile OS. Intel and Samsung are jointly backing the efforts in developing Tizen. Earlier this year, Samsung unveiled its plans to merge its home-grown mobile OS, bada with Tizen. The company also stated that "at least one to two" devices running on Tizen will be released this year.

It is too early to determine whether Tizen will succeed as viable mobile OS since the market is increasingly becoming a two-horse race between Apple iOS and Google Android. Microsoft's Windows Phone 7 has yet to gain much traction while RIM is prepping its next generation BlackBerry 10 OS for a release later this year. Will Tizen be the next big thing in the near future?