Apple CEO, Tim Cook, has posted an open letter to Apple customers announcing that the company will oppose an order from a U.S. Federal judge asking it to help the FBI access data on an iPhone used by the San Bernardino shooter, Syed Farook.

Cook says that this moment is one for public discussion, and that the company wants its customers to understand what's at stake.

Read the rest of the letter here.

To be clear, the FBI is asking Apple specifically for help hacking into Farook's specific iPhone, however Cook fears that "once created, the technique could be used over and over again, on any number of devices." The encryption chip in every iPhone uses an algorithm called AES. Each iPhone has a unique 256 bit encryption key that is needed to scramble or unscramble the data on the iPhone, which makes brute force hacking techniques unviable. Apple has chosen not to keep copies of iPhone keys after the smartphones leave its factories, so even if Apple wanted to help the FBI gain access to Farook's phone, they can't.

However, while the encryption chip itself is strong, Apple's default passcode is just a four digit code. This passcode can be brute force hacked, as there are just 10,000 possible combinations. The problem is, iOS has built-in security features that prevent this: multiple wrong passcode attempts will result in a delay of up to an hour before the iPhone will accept additional guesses. Additionally, a user can enable a self-destruct feature that will permanently wipe the phone's data if the wrong passcode is entered too many times.

This is where the FBI is asking Apple for help. It wants Apple to create a unique version of iOS that will make it easier for the FBI to guess his passcode. The FBI wants Apple to disable delays between passcode guesses, disable the self-destruct feature, and allow passcodes to be entered electronically over a wifi network or using the iPhone's lightning port. Taken together, these measures will allow the FBI to guess Farook's passcode much more quickly than it could have otherwise — and without worrying about triggering the phone's auto-wipe function.

Google CEO, Sundar Pichai, has taken to Twitter to back Cook: 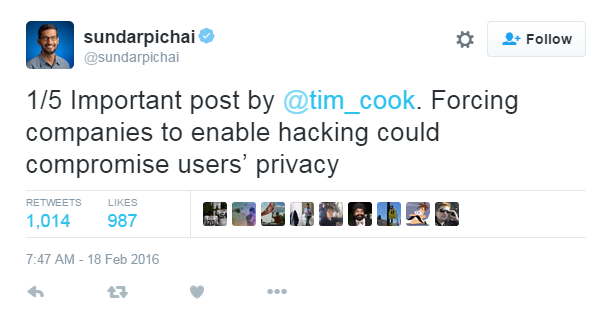 You can read the rest of his five-part tweet here.

Previous Story
This tiny glass disc can store up to 360TB of data and for 13.8 billion years
Next Story
Microsoft’s Surface sleep bug fix is finally here
Loading...
Featured Highlights