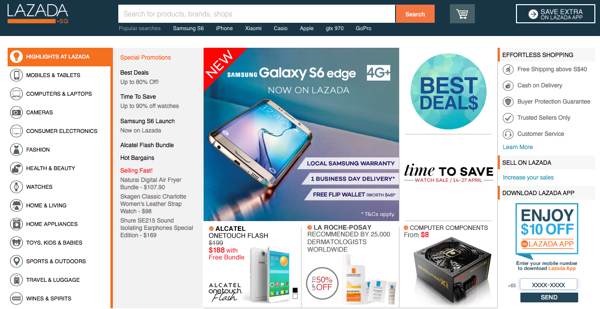 Online shopping is the rage these days. Just yesterday, we reported that Xiaomi has entered the Guinness World Record for selling 2.11 million phones in 12 hours. Now, we've heard that the Lazada Group has achieved US$1 billion of annualized Gross Merchandize Value (GMV) regionally this past March.

For those unaware, Lazada is an e-commerce startup with footprints in Southeast Asian countries like Singapore, Indonesia, Malaysia, Philippines, Thailand, and Vietnam. The group's US$1 billion annualized GMV (i.e., estimated total value of merchandize for the full year) milestone in March 2015 represents a 350% growth versus March 2014’s GMV results; and it's achieved in just three years after launch, which is pretty remarkable for a company that aims to become this region's Amazon.com.

For those interested in numbers, we were told that during Lazada Singapore's recent first-year birthday sale campaign that ran from April 7 to 9, it drew close to half a million visits to its sites and mobile applications. It also saw more than 10 thousand mobile app downloads over the three-day period, contributing to over 200,000 downloads to date.

Join HWZ's Telegram channel here and catch all the latest tech news!
Our articles may contain affiliate links. If you buy through these links, we may earn a small commission.
Previous Story
Apple's WWDC 2015 to take place from June 8 to 12 in San Francisco
Next Story
ASUS unveils its 20th anniversary gold edition GTX 980 graphics card