Thousands of dollars deducted from fraudulent iTunes charges in Singapore

Thousands of dollars deducted from fraudulent iTunes charges in Singapore 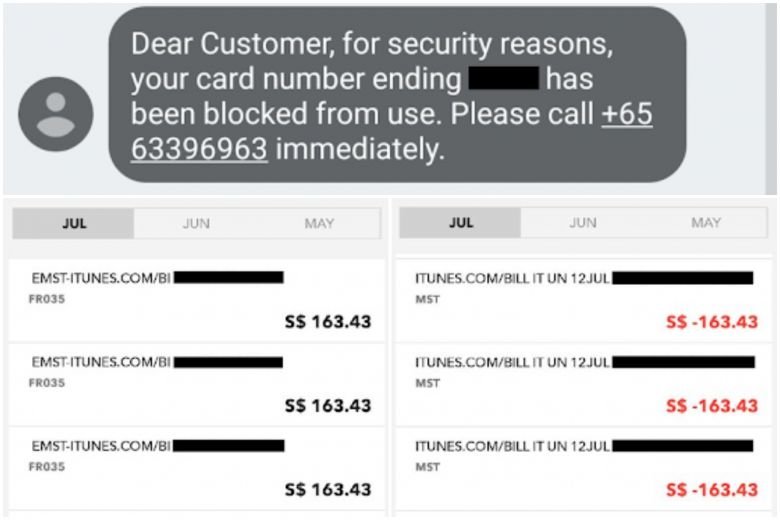 This article by Tee Zhuo first appeared in the Straits Times on 20th July, 2018.

Several Apple customers are complaining of fraudulent purchases made on their iTunes accounts, causing deductions of up to thousands of dollars.

An Apple spokesman, responding to queries on Sunday (July 22), would not comment on the extent of the problem but said that the company is looking into the matter.

Channel NewsAsia first reported Sunday that “dozens” were affected. The exact number is unclear, but the problem appears to have hit customers of most major banks here.

Mr Vincent Tan, head of credit cards at OCBC Bank, said that the bank had detected and investigated unusual transactions on 58 cardholders' accounts.

"Upon confirmation that these were fraudulent transactions, we deployed the necessary counter-measures and are currently assisting the affected cardholders via the chargeback process," he said.

Mr Tan also advised cardholders to be vigilant and contact the bank if they notice any suspicious activity on their card accounts.

Ms Chen Yi Ling, 25, who works in communications, told The Straits Times that she had not used Apple’s services or products for at least five years.

“I had just got off work to see a movie, and got a message from DBS saying that my card had been blocked,” she said.

An Apple customer service officer told her that there had indeed not been any transactions on her Apple account, but that her debit card had been used by a fraudulent iTunes account.

Apple terminated that account, and DBS refunded 20 of the 27 transactions for Ms Chen on Thursday.

“We also constantly monitor credit/debit card transactions in real time for any suspicious activities...we urge customers to call us immediately at 1800 111 1111 if they notice suspicious or unusual activity in their accounts.”

Customers were called when fraudulent transactions were suspected or had their accounts temporarily blocked if they could not be reached.

“For any confirmed fraudulent transaction, we helped our customer to claim a refund. We also issued them a new card as an additional security measure,” she said.

IT consultant Roy Chow, 37, said that $1,049.84 in his Maybank account had been taken over multiple transactions before he received a notification that his card was blocked.

“I didn’t call Apple, but I called Maybank to check and they immediately said they would send me a replacement card...I think some loopholes with Apple when linking the card to the iTunes account are causing this exploitation,” he added.

Ms Lai Bee Lan, 43, had $478.42 deducted from her Standard Chartered account in three transactions on Tuesday.

The mechanical designer said that she only called the bank, as she had heard there was no use reporting it to the police.

The Apple spokesman also pointed to the firm’s support page, where customers can report problems with their iTunes purchases: https://support.apple.com/en-sg/HT204084.