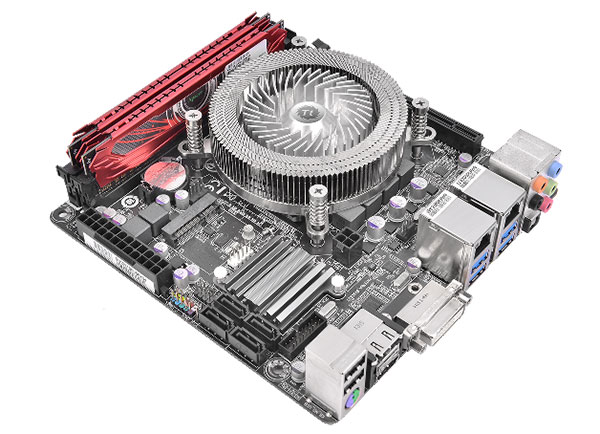 Thermaltake has announced the Engine 27 1U, a low-profile CPU cooler with an exceedingly small footprint. There’s a decent selection of spacious mini-ITX cases on the market today, but if you wanted to keep things really compact, it’s difficult to beat Thermaltake’s new cooler which is a mere 27mm in height.

That said, Thermaltake has attempted to keep performance in mind when designing the Engine 27 1U. The new cooler is actually highly reminiscent of Thermaltake’s earlier Orb coolers, but with certain key changes.

The 60mm PWM fan – this means the fan can run only as fast as necessary, thus keeping noise down – features an aluminum alloy structure that the company says enables a more efficient thermal path. The metallic fan structure enables the fan to draw heat directly from the CPU, increasing the surface area available for heat dissipation.

Furthermore, the metallic fan base features small radial gaps that allow heat to be transferred quickly to the fan itself. This means heat is more easily offloaded to the moving air generated by the fan, improving cooling performance in the process.

The fan itself has a total of 40 blades that Thermaltake says helps balance out cooling performance and noise levels. The high number of blades enables the fan to pull larger volumes of air through the heatsink from all angles, while creating a centrifugal force that acts to expels hot air out the sides more efficiently.

Finally, the heatsink itself boasts a dense radial fin design – 129 fins to be exact – that minimizes the gap between the fan and the fins. This further reduces inefficiencies during the heat transfer process.