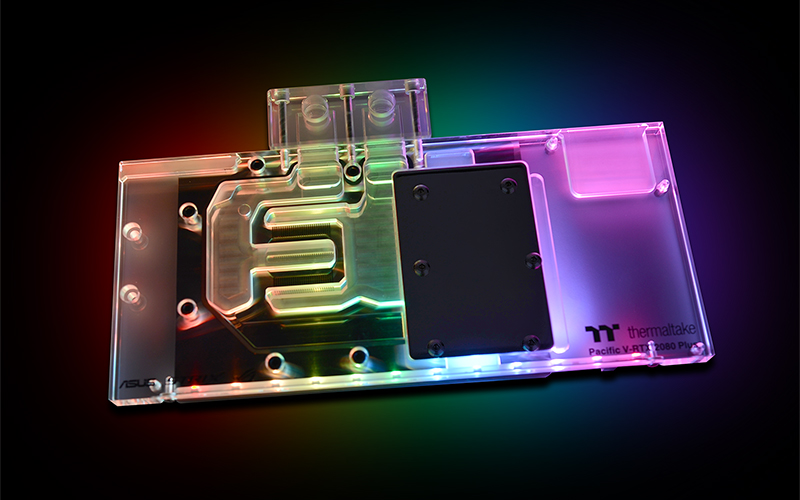 They feature LED strips that support up to 16.8 million colors and can be controlled using the TT RGB Plus software. Voice control is enabled as well, and you can customize the lights using the TT AI Voice Control feature or Amazon Alexa. The LED strip comprises 12 individually addressable LEDs, so you’ll be able to tweak the effects just to your liking.

In addition, the lighting can be synchronized with ASUS, Gigabyte, MSI, and ASRock motherboards, which means you can customize the lighting effects using your motherboard software.

There’s a digital lighting controller included as well, and it comes with a DIP switch that lets you assign a number to each controller. In this way, you can add multiple controllers – up to 16 – and connect up to five devices to one controller.

The water block is equipped with a copper base machined to a mirror finish (it also has an anti-corrosive surface) that Thermaltake says facilitates more efficient heat transfer. It also features a 0.5mm micro-channel fin construction that supposedly improves heat dissipation.

On top of that, it ships with a 4mm-thick aluminum alloy backplate that fully covers the rear of the GPU and helps prevent any flexing of the PCB.

ASUS' ROG Strix cards lean toward a plainer design aesthetic, so these water blocks could really help add some extra panache to your build. In addition, the card happens to be the winner of our GeForce RTX 2080 shootout, so there's plenty of reason why you'd want to invest in one and shell out for the water block.