Hideo Kojima did something unprecedented today at Tokyo Game Show 2019: He told us what Death Stranding is about! Not only that, but he dropped 50 (!) minutes of gameplay, showing off the game’s social media-like multiplayer system, a boss battle and Sam’s sick harmonica-playing skills. It’s a whole lot to dissect - especially since it’s all in Japanese without subtitles - so let me break down the most important bits for you.

Be prepared or pay the price

The first thing that struck me was how gorgeous this game’s UI looks. The menus are very much in line with Metal Gear Solid V: Phantom Pain - futuristic, sleek and unique. We see Sam prepare at a BRIDGES base (more on that in a bit) for his next cargo-delivering journey. He can equip a whole bunch of different items here. Some, like ladders, might prove to be necessary for the long hike ahead of you. While we don’t explicitly see other multiplayer characters, we do see their effects on the world. As you travel, you can see equipment put down on the land that others have generously left behind for you. Sam finds a ladder that has put been down on a gap between two cliffs - and leaves a ‘like’ before he crosses.

What was that about ‘likes’? Alright, so - this game seems to have a sort of ‘like’ system where players can ‘like’ each other after helping out in the open world. Each player will have a certain amount of ‘likes’ - for example, the Sam in this video had received around 1600 likes by this point in the game. Players can also get likes from singleplayer activities, like playing the harmonica to your BB (the pod baby aka Bridge Baby). It’s currently unclear what these ‘likes’ are used for during gameplay, but rest assured that it’ll be something weird.

The journey will be long and dangerous Parts of the map were shown off as Kojima demonstrated how players can plot their own specific courses during gameplay. It’s huge! You’ll certainly be walking a lot, and Sam will suffer as a result. At one point, Sam rests on the ground and removes his boots - at which point we see his bloody feet. You’ll need to rest up whenever possible, even at muddy looking hot springs! 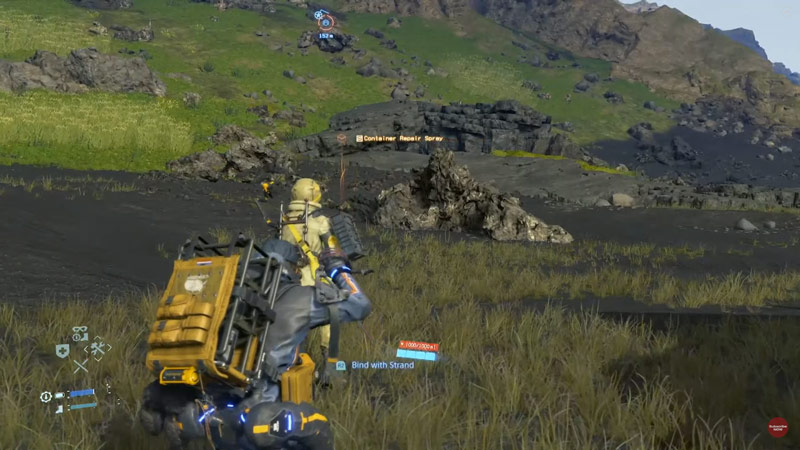 We see Sam also infiltrate some sort of base and sneak around, performing silent takedowns using ropes. When discovered, he begins using a type of long-range taser that wraps the enemy in electrical rope, stunning and trapping them. Useful!

You don’t have to walk all the way Sam drives a lot of things in just the span of this 50-minute video. Trucks, motorcycles and even a hoverboard! The hoverboard is a Floating Carrier, which can also be used to carry cargo if Sam needs to take a load off. Needless to say, transportation won’t be a problem in this game - if you have the right equipment. 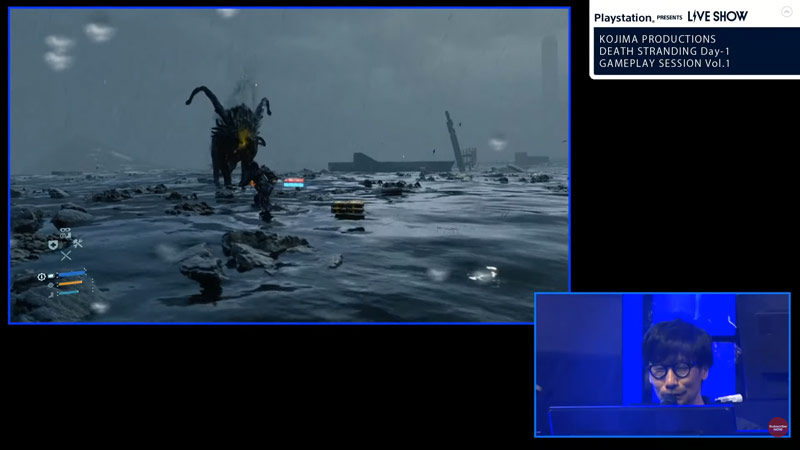 Sam gets dragged under the ground by BTs or "Beached Things", supernatural monsters from other dimensions that are rampaging in the United Cities of America, halfway through the video, and ends up in a sort of altered world. This world is sinking under water, and Sam has to eject his cargo to swiftly lob grenades and bombs at an incredibly fearsome enemy - the lion-esque BT boss from this previous trailer! Honestly, this boss fight looked a little slow and awkward. Hopefully it’s more intense to play through than it is to watch.

The story of Death Stranding

Remember how I said I’d get back to BRIDGES? Well, here’s the thing - we know what Death Stranding is about now. A ‘Briefing’ trailer released earlier today laid out the game’s basic plot. Apparently, Amelie (played by Lindsay Wagner) is the UCA’s leader. She’s been captured and held somewhere off-location, and pleads to Sam via hologram to continue her mission.

She and Die-Hardman (Tommie Earl Jenkins) run an organisation called Bridges that have been trying to reconnect the broken pieces of America back together. She went missing while doing so, which means it’s up to Sam to continue her mission and rescue her along the way.

For now! Tune in later for 30 minutes more of Death Stranding gameplay, where I’ll break down it all down for you again.