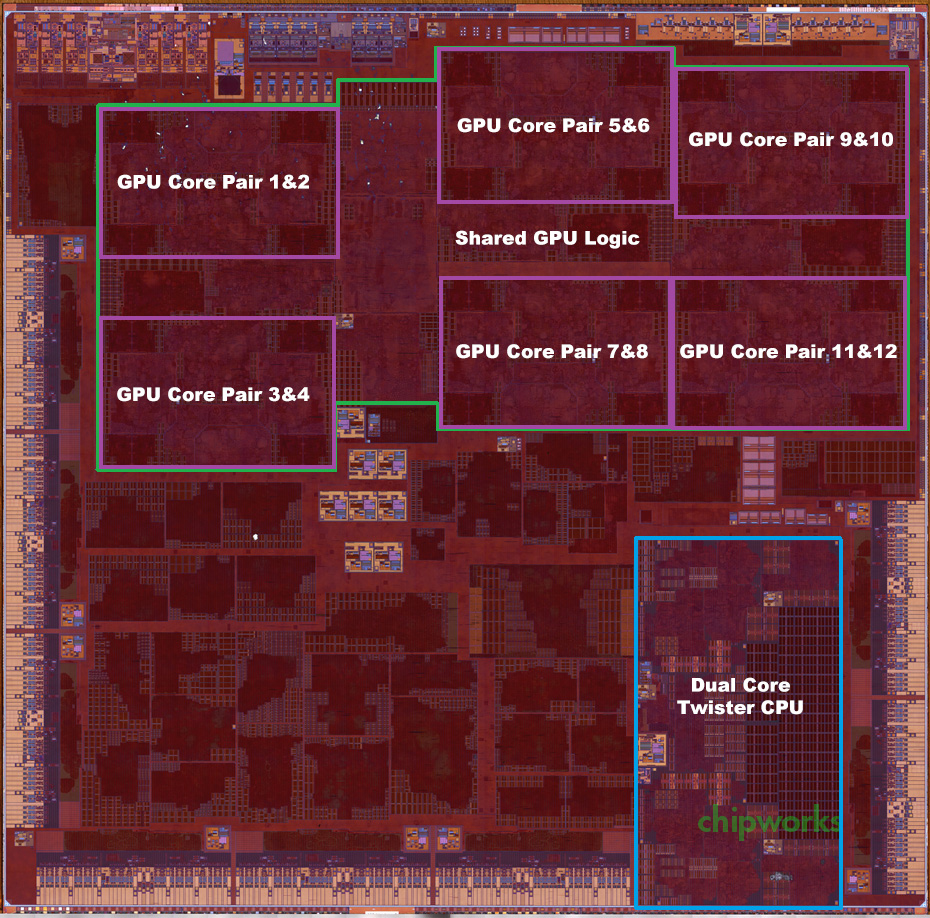 The extremely curious folks at Chipworks and AnandTech spent the previous weekend digging into Apple’s dual-core A9X processor, to learn about the inner workings of the mysterious Apple chip which did not have much information available – until now. If you haven’t been following, the A9X SoC is found on the iPad Pro. We’ve recently reviewed and benchmarked the performance of the iPad Pro super-tablet. It has vastly outperformed (in terms of benchmark scores) the iPad Air 2, iPad Mini 4, and other Android-based tablets from this year’s releases. The A9X It is fed by a memory controller with a 128-bit LPDDR4 configuration. By comparison, the iPhone 6s and 6s Plus both use an A9 processor, and it has half the number of GPU cores, when compared to the A9X. The A9 also has a 128-memory bus feeding it for boosted memory bandwidth and GPU performance. According to AnandTech, this means that Apple now have a sizable 51.2GB/sec of memory bandwidth to play with, but the banwidth will be quickly consumed by those 12 GPU cores.

However, it’s important to note that the Chipworks teardown and AnandTech analysis only showed one sample of the A9X processor, which is manufactured by TSMC. Apple has been getting the A9 chips from two manufacturers - TSMC and Samsung, and the chips have some differences, such as a difference in overall battery life on the same phone models. It has not been confirmed if every A9X processor is solely from TSMC, or if the A9X SoC also follows the same trend.

Apple has spoken about the “chipgate” battery saga, saying that there’s only 2% to 3% difference in battery life between the TSMC and Samsung versions of A9 processors, and the tests shown by other users are not indicative of real-world usage. Technically speaking, the differences fall well within manufacturing tolerance range, even if the chips come from only one manufacturer.

The A9X processor also lacks an L3 cache – something which the A9 and its predecessors, along with other CPUs from other chipmakers like Intel uses. The L3 cache is, quite simply, a single memory bank built onto a CPU or motherboard to support the L2 (and L1) cache on each core for better overall speed and performance – you can read it up on our site here. Ars Technica proposes that the A9X left out the L3 cache because the speed gains from a large L2 cache, faster LPDDR4 memory, and wider 128-bit memory bus was sufficient for the processor.