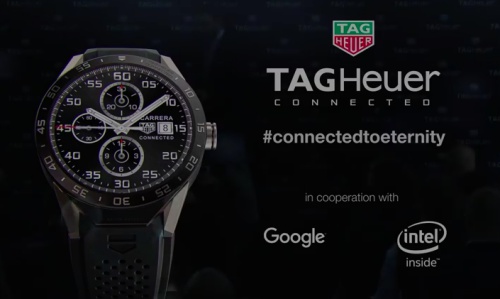 Close to a year after announcing its plans to unveil a smartwatch, Swiss watchmaker Tag Heuer today announced the Connected Watch.

Positioned as a luxury smartwatch, the Connected Watch is the first Android Wear device to cost above US$1,000. In fact, it is priced at US$1,500 (~S$2,132) which is more than twice the retail price of Huawei Watch Elite.

As hinted by Tag Heuer CEO Jean-Claude Biver in June, the Connected Watch resembles the Carrera analog watches. While it is not made of gold, the Connected Watch is constructed with titanium and can be personalized with six different rubber straps, a far cry from the different straps available for the Apple Watch models.

The 1.5-inch touchscreen LCD display is reinforced with sapphire crystal and has a resolution of 360 x 360 pixels. Tag Heuer developed three watches faces for the Connected which are all analog designs. You also have the option to install third-party clock faces from the Google Play Store. In the near future, Tag Heuer will be introducing watch faces designed with its brand ambassadors such as Tom Brady and Leonardo DiCaprio.

Tag Heuer is offering what most smartwatch makers lack - a trade-in program. Known as the "connected to eternity", a Connected Watch owner can trade the device in after two years at any Tag Heuer retail store and top up US$1,500 to get a mechanical Tag Heuer watch. You can see this trade-in program as an admission by Tag Heuer that today's smartwatches will get obsolete in a year or two.

If you are interested to purchase the Connected Watch, it is available at the 9 Tag Heuer boutiques and 19 retail partners across the U.S and Canada. Tag Heuer states that it will be rolling out to international markets from December.

Join HWZ's Telegram channel here and catch all the latest tech news!
Our articles may contain affiliate links. If you buy through these links, we may earn a small commission.
Previous Story
NVIDIA announces a pair of new Maxwell-based Tesla graphics accelerators
Next Story
Apple iPad Pro available for purchase in Singapore from 11 Nov