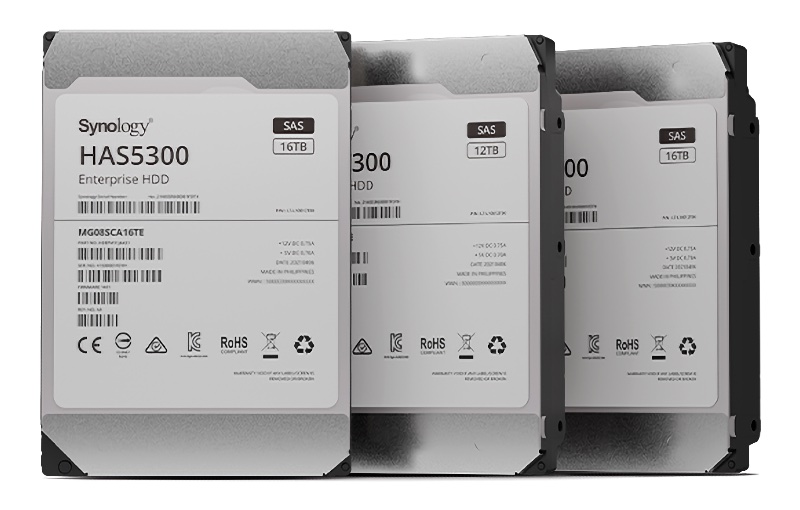 Following the launch of their HAT5300 SATA drives in January this year, Synology is following this up with three more 3.5-inch drives in the same 8TB, 12TB, and 16TB capacities.

Unlike the SATA drives that the company said were for businesses wanting “high-performance and maximum reliability”, Synology is saying that these will deliver the performance their UC and SA enterprise-level storage arrays need.

NAS reliability has been under scrutiny recently with WD NAS drives being hit by a series of mysterious data deletions.

By leveraging the SAS protocol, Synology HAS5300 drives allow customers to scale up to 180 drives on the high-performance Synology SA series or to maximise iSCSI system availability with the dual controller setup on the UC3200 active-active IP SAN.

These figures aren’t actually far off those for the HAT5300 series. Which we found strange given that SAS drives were meant to perform better than SATA drives. When we asked Synology this, they replied that MTTF is more related to design and materials on hardware. Both SATA and SAS are protocols for HDD, so the protocol type won't affect MTTF. So the same MTTF of HAT5300 and HAS5300 is just a coincidence.

Firmware updates for the HAS5300 drive will be shipped together with Synology's DiskStation Manager 7.0 (DSM) operating system that was launched this month.

Synology did not release any pricing for the HAS5300 drives only saying that they have a five-year warranty and are available now from Synology distributors in Singapore. For comparison, the HAT5300 8TB and 12TB drives were priced at S$379 and S$559 respectively, while the price of the 16TB was available on enquiry.

Join HWZ's Telegram channel here and catch all the latest tech news!
Our articles may contain affiliate links. If you buy through these links, we may earn a small commission.
Previous Story
Deadpool takes his first steps into the MCU for a reaction video with Korg
Next Story
Red Dead Redemption 2's new DLSS update on PC grants a 45% performance boost