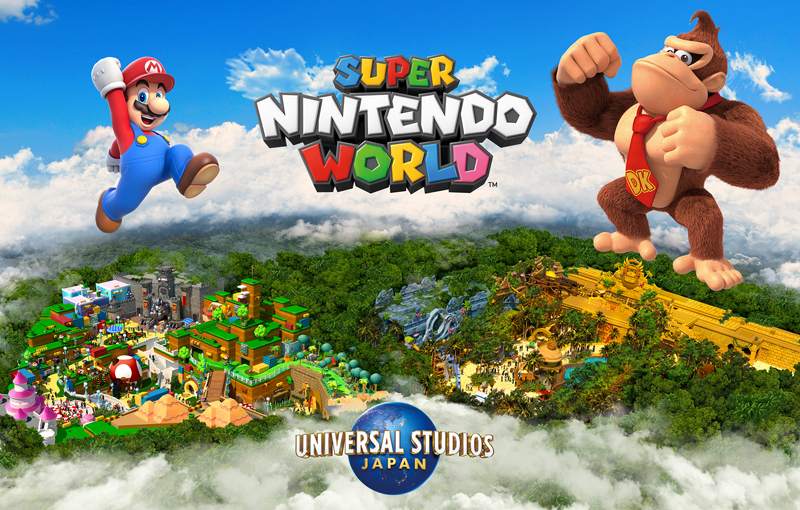 Mario and Donkey Kong together, the way it was always meant to be.

Universal Studios’ Super Nintendo World theme park in Osaka Japan is getting a new Donkey Kong-themed expansion in 2024. Via a news release, Nintendo announced that the new area will increase the theme park’s size by about 70% - so this won't be a small addition by any means.

Nintendo announced that the new Donkey Kong area will come with multiple new attractions, including, “a roller coaster, interactive experiences and themed merchandise and food.” The area will consist of lush jungles where Donkey Kong and his friends live, so one should expect forest-themed areas and many, many bananas.

The artwork released by Nintendo (seen above) features an early look at this new area, and it looks expectedly forest-themed. There seems to be lots of sand, a pool and temple-like buildings that could house rollercoasters and baddies from the games. Super Mario’s creator Shigeru Miyamoto is working with the Universal and Nintendo creative teams to bring this area to life, so it’ll certainly be authentic to the platforming game franchise.

Super Nintendo World already seems like a tempting visit for Mario fans. It’s filled with attractions and visual nods themed after the Super Mario franchise, including massive monuments such as Bowser’s Castle and entire areas made to look like levels from the games. There’s also Mario-themed food to enjoy in the park’s restaurants, and minigames involving an AR-like Power Up band visitors get upon arrival.

Super Nintendo World seems rife with potential extending beyond Mario and friends however, and this Donkey Kong expansion seems like a step in the right direction. Between The Legend of Zelda and Animal Crossing, there are endless opportunities to add onto the park in the years to come. The only question that remains is: will Seth Rogen voice Donkey Kong here too?

Join HWZ's Telegram channel here and catch all the latest tech news!
Our articles may contain affiliate links. If you buy through these links, we may earn a small commission.
Previous Story
You can start playing Battlefield 2042's open beta in October
Next Story
This ultra-rare Warhammer 40,000 Thunderhawk miniature has sold for a monstrous US$35,000