Summing up the results of Esports Festival Asia 2019! 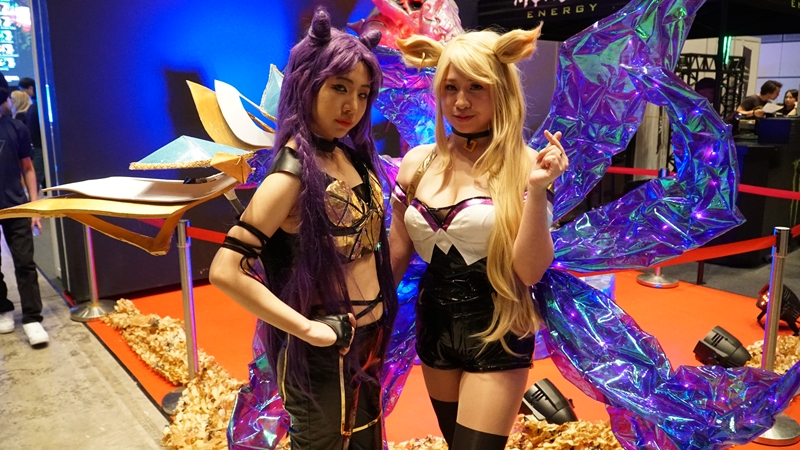 Man, If I had ten bucks for each time I thought professional esports was lucrative, I'd definitely have enough money to build a mansion, possibly made up of multiple, smaller mansions.

Anyway, with Esports Festival Asia 2019 officially done and dusted, we have a moment of respite to breathe and properly review the happenings of the past four days. With that said, let's take one more look at the tournament winners - in article form this time.

First up, we have the FSL, featuring two MOBA games as part of its competitive menu: Arena of Valor and League of Legends. With representatives from various countries including Vietnam, Thailand, the Philippines and of course Singapore taking part, the stage was already set for an intense gauntlet of matches.

Arena of Valor, Garena's first foray into a mobile MOBA title, certainly presents Mobile Legends: Bang Bang with a strong competitor. The game's popularity has grown by leaps and bounds since its inception, so much so that some organisations actually have independent, dedicated teams for both MLBB and AoV. Wow. 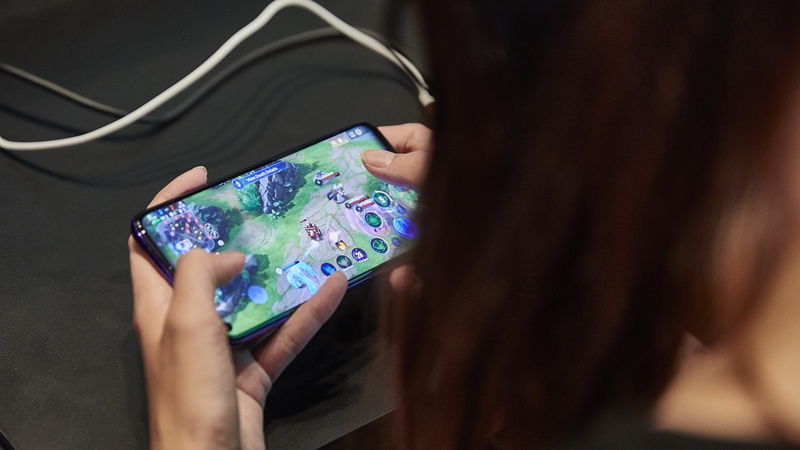 Anyway, back to the FSL. The tournament sported the most diversity, not just in terms of participants, but with regard to live-streams as well. It was the only event casted in three languages: English, Vietnamese and Thai, each with their own talented duo of casters guiding viewers through the match.

Over on the AoV stage, the top spots were occupied by EVOSxBazaar.7Treasure and EVOS Esports, who faced off in a titanic clash of wits, skill and teamwork on Day 2. It's arguably friendly fire in a way, but who cares? The audience certainly didn't - all that mattered was the game. But after a bloody tug-of-war between both teams that left many turtles and Lords in their wake, the former emerged triumphant from the ashes.

As such, they'll be walking away with a solid S$1000, 5 x G933S Logitech Headsets and 5 x StygianForce Professional kits! 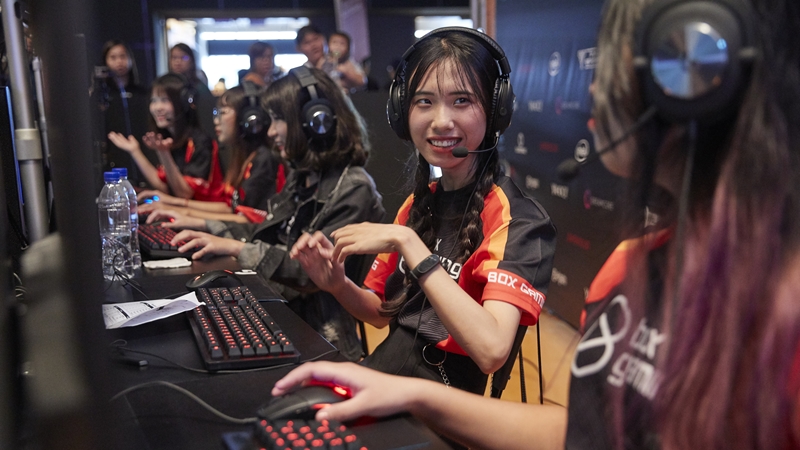 The other title is a familiar face: League of Legends. Supposedly the most popular MOBA in the world, going neck-to-neck with Dota 2 in almost every gameplay aspect, the FSL's LoL line-up also saw fierce clashes between skilled all-female teams like Box Gaming, TOP 10 DINOS, Lannister and Liyab Esports.

The finals match on Day 4 saw Box Gaming going up against TOP 10 DINOS, and let me just say: if you somehow have an 8/2/1 Darius on your team, chances are you're going to win most engagements, and probably the match, for that matter. Well, to the surprise of absolutely no one, Box Gaming did exactly that, snagging the match plus S$1000 and 5 x G512 Logitech G keyboards!

Ten years ago, Counter Strike: Global Offensive was a popular game, and come 2019 it still remains one of Valve's best-selling franchises to date. However, that's only part of the reason why such a large crowd gathered to watch the Extremesland CS:GO Asia Open Regional Qualifiers.

Well, there was much more than just a cash prize to look forward to this time; it was about glory too. After all, the winning team would not only snag the title of regional champion, but also the privilege of representing Southeast Asia at the Grand Finals in Shanghai, China later this year! 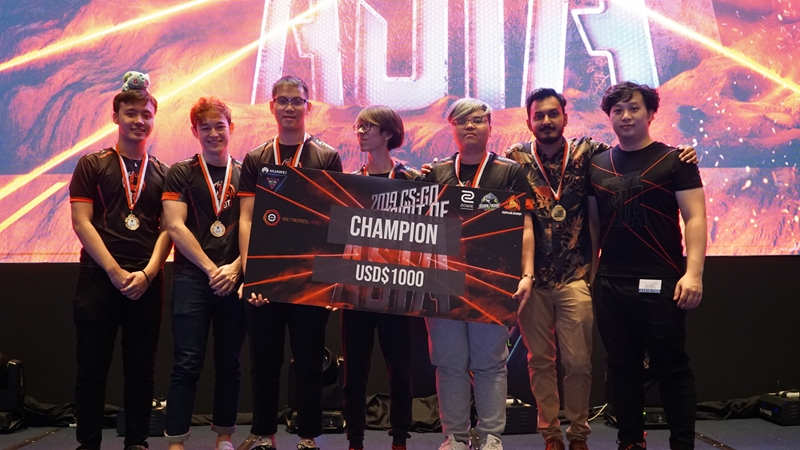 And after four days of intense tactical coordination and focus, our homegrown Singaporean team B.O.O.T-dream[S]cape managed to score a decisive victory against Bren Esports in the finals. They took home a total of US$1000 for their efforts - and of course, those metaphorical plane tickets to Shanghai. We wish them all the best in their upcoming matches. 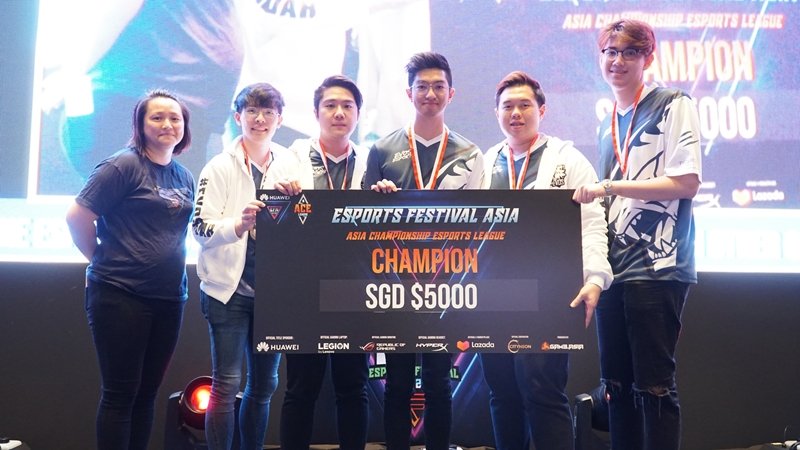 Like EFA, the ACE League also made its debut over the past weekend. MLBB shows up again as part of the list of games, which isn't surprising, to say the least. At this point, it's almost as representative of mobile gaming as Resident Evil is of horror and zombies.

Regardless, for what it lacks in novelty it certainly compensated for in intensity. Although it wasn't the finals match, I really enjoyed the match that took place between Notorious Villains and Louvre Esports. The plays were fast, fierce and decisive, with each consecutive gank and countergank taking an increasing toll on the opponent.

Notorious Villains ended up winning that matchup and would go on to fight EVOS SG in the finals. To their credit, they did put up a spectacular defense there, although it wasn't nearly enough to survive EVOS' amazing onslaught. On that note, EVOS SG walked away with no less than S$5000, which is probably sizable enough to buy me coffee for the next three years or so.

Next up on the agenda is Dota Underlords. Arguably the newest title of the bunch, this tactical chess-like hit based on the ever-popular Defense of the Ancients MOBA rapidly took the world by storm. The concepts used in Underlords are supposedly similar to other tactical games - many Hearthstone players have found great success playing it too. 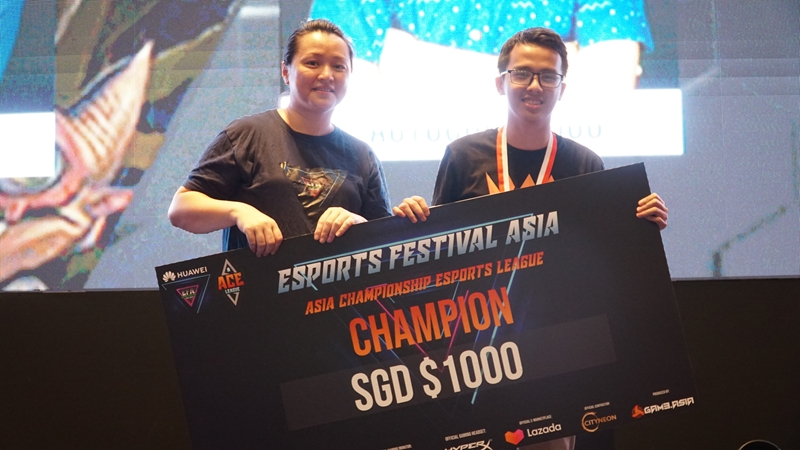 To illustrate, simply take a look at the top 3 players for EFA. With the exception of Autochess dog, who took home the champion's cheque for S$1000, the silver and bronze medallists are both professional Hearthstone players from Resurgence, SilverByz and Sequinox. The duo received S$500 and S$200 respectively for their achievements. 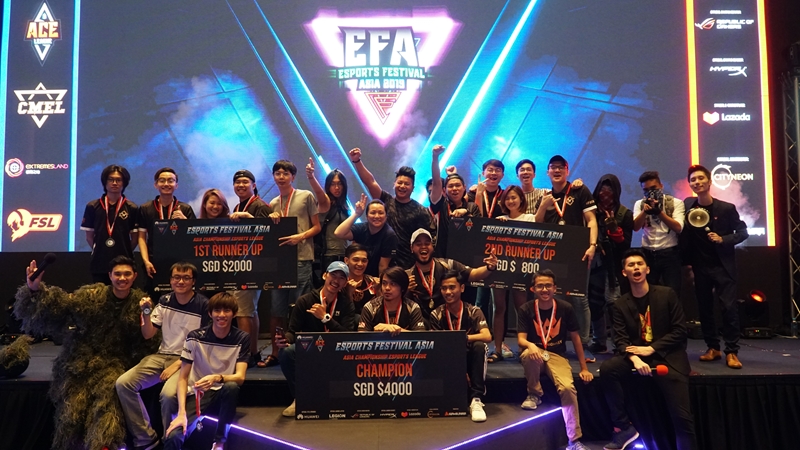 The last title played as part of the ACE League at EFA 2019 was the mobile version of the definitive battle royale, PUBG Mobile. This year's event was won by Axis X Bosskur, followed by Divinity Reapers and Divinity Gaming in the second and third place. From a bystander's perspective, their victory came as a real surprise, given they were trailing behind in fourth place in Group B at the end of Day 3.

That being said, there's no point downplaying their achievement either. Their tenacity, coordination and determination in Day 4 did bear fruit, allowing them to surge past crowd favourites Resurgence to take the crown. Well, there's not much else to say - they certainly deserve that S$4000 champions' cheque. Well played, guys!

EFA 2019 certainly saw a lot of "inaugural runs" in and of itself, of which the China Mobile Esports League (CMEL) is one of them. Although only League of Legends (yes, this again) was featured this year, they were arguably the most well-attended competitive event at EFA, from my point of view. 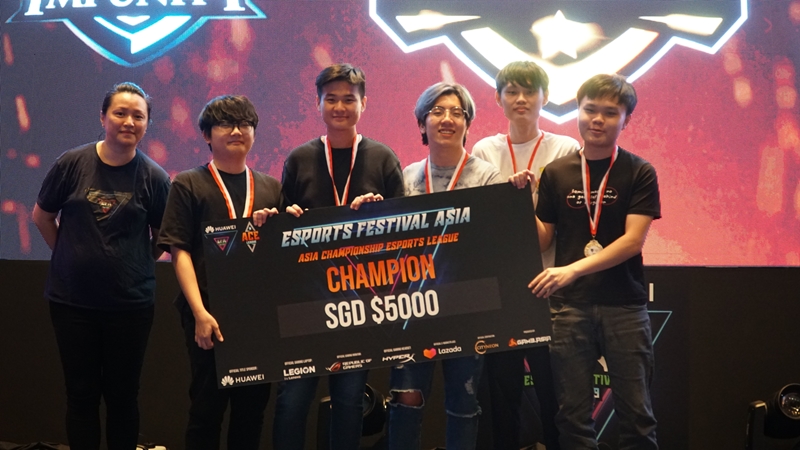 I guess that just goes to show how big a playerbase the game has. In any case, the match between Impunity and Animal Kingdom for first place was my personal highlight. It was...vicious, for lack of a better word. Kills and objectives were being traded like coins at the market, but somehow the latter managed to pull ahead and maintain that lead, obliterating the opponent's nexus and snagging themselves a cool S$5000!

With that, it's game, set and match! We're finally done, and we've worked up quite a sweat actually. Phew. So much for taking a breather.

Winning competitions are awesome, but as always, we know everyone put in their best efforts, whichever game they were playing. And so we'll end off this article as we did for the last piece: good game and well played all.