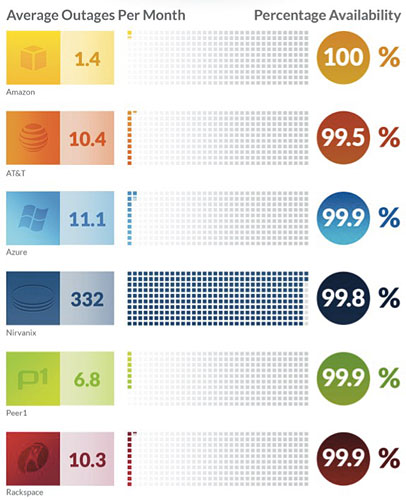 Nasuni, an enterprise data protection service provider, has been evaluating over a dozen cloud providers since April 2009. According to a study recently released by Nasuni, out of the 16 cloud storage providers evaluated for their performance, stability and scalability, only six passed the test. The top performers are Amazon S3 and Microsoft Azure. The other four are AT&T Synaptic, Nirvanix, Peer1 Hosting, and Rackspace Cloud. So who are the 10 who failed? Nasuni didn’t say.

At the unit level testing stage at the beginning, already there were five providers who failed even at simple write-read-delete operations. In the write speed test for large files, Microsoft’s Windows Azure platform came out tops; Amazon came in fifth. However, the latter excelled in the stability test: it had the fewest outages (1.43 per month).

At the end of the day, there were very few differences between Amazon and Microsoft. Amazon won as it had the best overall results. So while Nirvanix and Microsoft Azure were faster for large files and writing files respectively than Amazon S3, S3 provided consistently fast service across all file types. It also had the fewest outages, best uptime (100% versus 99.9% for Azure), and a 0.0% error rate in both writing and reading objects. While Azure had a slightly faster average ping time than S3, the latter had the lowest variability.

For more details, please refer to Nasuni's report, which can be downloaded for free.