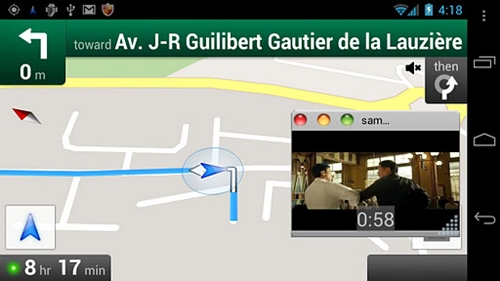 Samsung Galaxy SIII's new features might not be as exclusive as they have made it out to be; for one, the Android Flipboard APK is up on the Internet and ready to be used on various Android devices like the Samsung Galaxy Note, HTC One X and so forth. For those looking to enable Pop-up Play (for the uninitiated, this is one of the many "new" software features on the S III) on their existing Android smartphone, you can download Stick It! from the Google Play Store at SGD2.49. Stick It! does what Pop-up Play promises - it turns any clip you are watching into a floating window that can be placed anywhere on the screen so that you can concentrate on the other tasks at hand.

Electric Pig - You might be surprised to know, however, that an almost identical app is already on sale on the Google Play store, and it works on any recent Android phone. It’s called Stick It!, and the developer behind it has seen a staggering sevenfold sales boost since the announcement last week. It may not be baked into the OS, but for £1.19, Stick It! does a remarkable job of emulating Pop-up Play: when you start playing a clip, you can immediately turn it into a floating window you can place anywhere on your screen, so you can carry on watching while you browse the web or chat. It works on any Android 2.2 or up phone, supports a variety of video formats as well as YouTube clips, and best of all, it doesn’t need a quad-core to run: we’ve found it runs just fine on single-core Android phones.

Check out how it works here: