Updated on 20 June 2016: Added details on local price and availability.

In a time when just about every other mouse has a more-than 10,000DPI sensor, it’s getting a little tricky for brands to help their flagship mice stand out. In order to do this, manufacturers have gone down the route of everything from low-latency wireless performance to modular grips and even quirky designs. With that said, SteelSeries may just have broken new ground with the Rival 700, a modular mouse that comes with haptic feedback and an OLED display.

The Rival 700 first debuted at CES 2016, but it is only now that it became available to buy (even though it looks like it is out of stock already on the US site). And with the amount of novel new features on the mouse, it’s not difficult to see why.

For one, the Rival 700 can give you customizable vibration alerts on certain in-game events. According to SteelSeries, this is useful for getting feedback on things like your health status, ammo, mana, headshots, and even specific events like when you get stunned in a game. Dubbed “Tactile Alerts” by SteelSeries, the vibration feedback can even be adjusted for different patterns, duration, and other parameters, which means that each event gets its own unique alert.

This raises an obvious concern – would the vibration throw off mouse tracking in games that require pinpoint precision? SteelSeries claims to have thought of that as well, and it says that the Tactile Alerts motor moves up and down, and not left and right, so your tracking won’t be knocked off course. Still, until we’ve got the mouse in hand, there’s no way of knowing for sure if the vibrations interfere with sensor tracking.

The other highlight feature is the OLED display, which is located on the lower left side of the mouse. This can supposedly display information like in-game statistics between rounds, but we think people would more likely use it to display more mundane things like their gamer tag, logos, or even animated GIFs. After all, it seems more than a little awkward to refer to your mouse for in-game information.

Having said that, it could still come in useful for displaying the mouse settings, and you can adjust them directly on the mouse without needing to use the SteelSeries Engine 3 desktop software.

That aside, this is also a modular mouse, and you can actually do a lot more than just swap out the side buttons. If you’re feeling really narcissistic, the bottom palm rest piece can be replaced with a custom 3D-printed nameplate. Alternatively, you can also swap out the palm rest for something made of a different material. 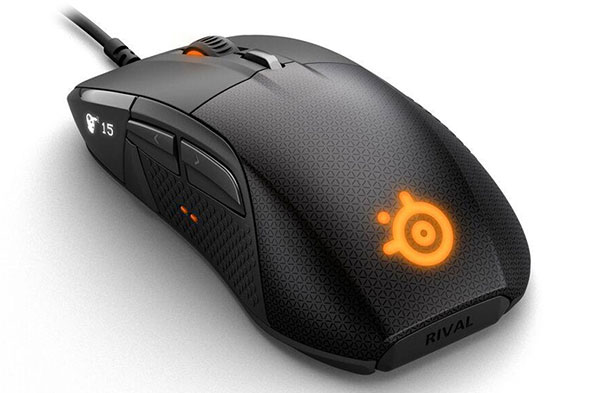 The final feather in the cap of the Rival 700 is the modular sensor design, which means you can just pop the sensor out and upgrade it with a new one without having to get a new mouse, should such modules become available in the future. But for now, the mouse comes with a 16,000DPI – or as SteelSeries prefers, CPI – PixArt PMW3360 optical sensor.

Join HWZ's Telegram channel here and catch all the latest tech news!
Our articles may contain affiliate links. If you buy through these links, we may earn a small commission.
Previous Story
The OnePlus 3 does not make full use of its 6GB RAM. Here's why.
Next Story
This gadget lets you play any game boy cartridge on your Android smartphone!