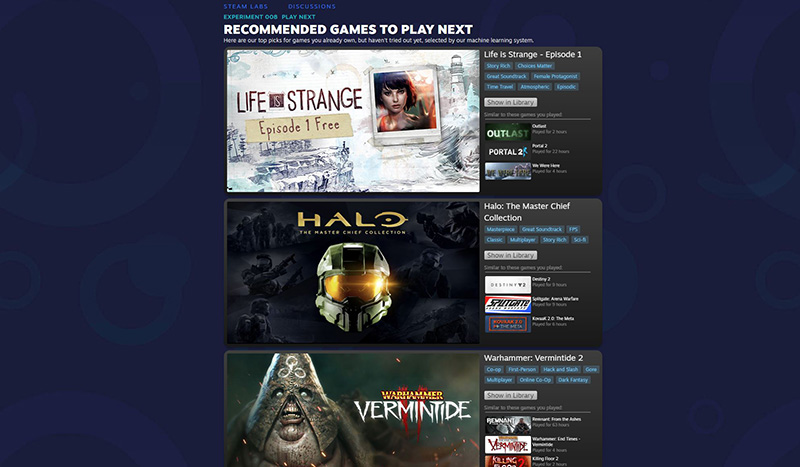 Valve has rolled out a new Steam Labs Experiment, and it's live now on its website. Many of us probably have more games in our Steam library than we've had time to play – squirelled away over multiple sales over the years – and Valve now wants to help with that. The Play Next experiment uses machine learning to suggest which games you should play next, making use of the same underlying technology that powers the Interactive Recommender.

The latter is already used to curate the titles that show up on your storefront, except now it's being applied to games you currently own. Up to three selections are shown at a time, and if nothing quite catches your eye, you can hit the "Next Picks" button at the bottom to switch to the next set.

At the moment, Valve recommends that I should play Life is Strange - Episode 1, Halo: The Master Chief Collection, and Warhammer: Vermintide 2, which incidentally, have been near the top of my to-play list for a while now.

Each of its suggestions come with a microtrailer, so you can see what kind of game it is. I mean, you bought the game at some point so you probably know what it's about, but when you've got hundreds of games piling up in your library, I guess everyone needs a reminder. And if you've played similar games, those will show up too so you get a better idea of what Valve's picks are like.

The algorithm it uses for picking comparable games is also a new system Valve is experimenting with, and the company says it's still a work-in-progress. Moving forward, I could see this coming in useful for improving its suggestions in the store too.

You can head over here now to try out the feature for yourself.