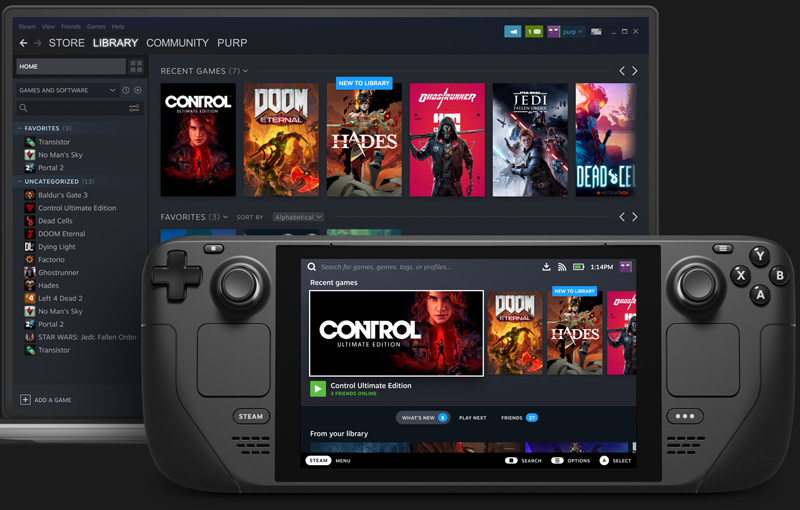 While Valve hasn’t found a game that the Steam Deck can’t handle, the device might not actually be able to run your entire Steam library at launch. During an interview with Boiling Steam, president of CodeWeavers James Ramey stated that the Steam Deck’s hardware is capable of handling games - but its software might not be up to par just yet.

CodeWeavers is working on Proton, a software that allows the Linux-based Steam Deck play games for Windows. Regarding Steam Deck coder Pierre-Loup Griffais’ earlier statement regarding the device’s ability to run games, Ramey explained, “People have kind of taken that and they have said 'well, that means it can support the entire Steam library'. I don't necessarily think that is true because not every game runs in Proton as of today.”

Ramey added that Proton is still being iterated upon, and will support a higher number of games when the Steam Deck launches. He also stated that a few groups are working with Valve to improve Proton, but stressed that he doesn’t have any insider knowledge on Valve.

What this means is that the Steam Deck might be able to run the majority of your Steam library at launch - but a few games will probably be left out due to their incompatibility with Proton. In a July Steamworks developer video, Valve said that its goal is, “for every game to work by the time we ship Steam Deck." Even if it doesn’t meet that goal immediately upon launch, one should expect Valve to keep working on the Steam Deck until every game is eventually supported.

The Steam Deck is still unavailable for pre-orders in Singapore, but look on the bright side - that just means you won’t have to deal with all these launch woes.

Join HWZ's Telegram channel here and catch all the latest tech news!
Our articles may contain affiliate links. If you buy through these links, we may earn a small commission.
Previous Story
Limited-edition collectible Pokemon Oreos are now a thing
Next Story
Diablo 2 Resurrected won't offer true ultrawide support because it straight-up ruins the game