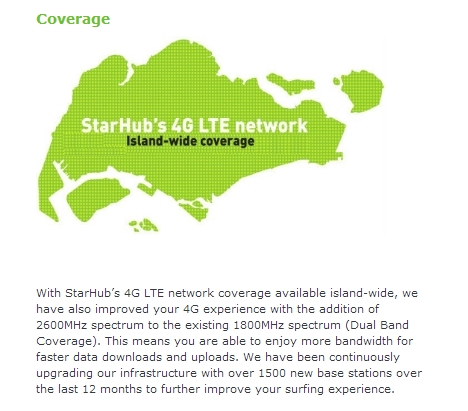 StarHub has completed the nationwide deployment of its 4G LTE network earlier this month according to its website and a short notification on customers' bills.

It is important to note that there is no 4G coverage at underground MRT stations and tunnels for all three telcos as the shared mobile infrastructure has yet to be built. The three telcos are working closely with the two train operators to roll out the shared 4G network, which is expected to complete in two to three years.

StarHub also said on its website that it has been upgrading its infrastructure with over 1,500 new base stations over the past 12 months to improve the user experience. The upgrading is part of the multi-million dollar capital expenditure on mobile network enhancements that the telco announced in June. Other mobile network upgrades include:

It's been a long time coming for StarHub. Its 4G network was launched on 19th September last year, where coverage was limited to the Central Business District, Changi Airport and Singapore Expo. The coverage hit 75% in June this year. Its free speed boost promotion, also known as the 4G value-added service (VAS) is free until 31st December 2013.

In comparison, M1 was the first telco in South East Asia and Singapore to deploy a nationwide 4G LTE service on 6th September last year. SingTel, on the other hand, rolled out its 4G network on 1st July last year which had an initial 50% coverage of the island. Coverage reached 80% in December and by April 2013, it had expanded its 4G network to offer nationwide coverage with speeds up to 150Mbps.

If you want to find out more about 4G LTE, do check out our Speedy Guide to 4G LTE. We also conducted two rounds of network tests (1) (2) in April 2013 to gauge the performance of all three telcos' 4G LTE networks.