6 reasons why you should jump on to StarHub's Smart WiFi

6 reasons why you should jump on to StarHub's Smart WiFi 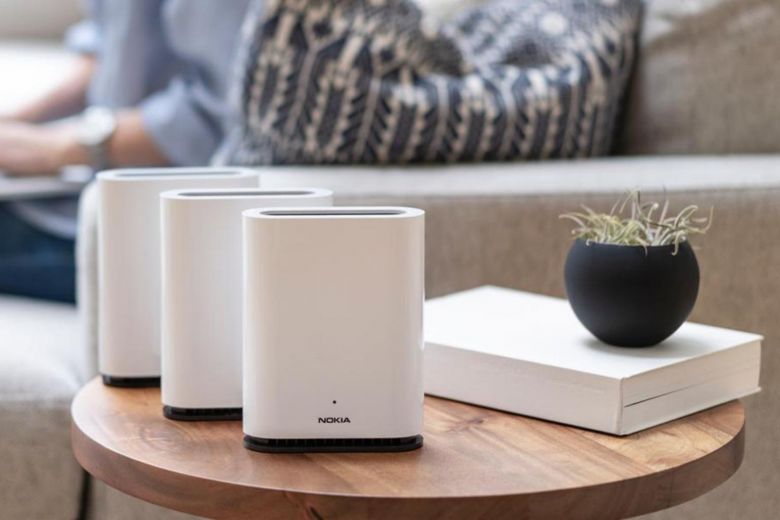 It has both plus and minus points, allows us to do a ton of stuff when it works, and at the same time, causes instantaneous panic when it doesn’t.

After all, there’s no doubt that networking and WiFi access affords us many conveniences - you can check out countless movies on Netflix or talk to people who are miles away via video conferencing.

But just like every other battery, tempers flare when that “power” runs out, and this is when we’re confronted with the dreaded “dead spots” scenario. These can be a real pain to your wireless experiences at home, and it’s an extremely (almost hilariously) common problem. Many households, not just in Singapore, often rely on a single router (usually an old one included with their home broadband packages), and as such have to contend with bad connectivity in certain parts of the house.

But that ends with the multi-node upgradeable StarHub Smart WiFi solution, an intelligent mesh networking unit that goes above and beyond the wireless call of duty to ensure seamless coverage throughout your home, be it in the bedroom, or the bathroom.

So, how does this nifty thing work? Well, it’s purposefully designed to tackle all those small annoyances that come with connectivity issues, by getting rid of WiFi dead spots altogether. Not only that, it even gives you the ability to connect to multiple access points (nodes), which work together to blanket your house in a WiFi “net”.

The mesh network also broadcasts on just one SSID, automatically connecting your devices to the nearest node as you move around the house. More Beacons will give you greater signal strength with zero dead spots, meaning that you’ll have seamless coverage throughout the whole house - finally!

Find out more about Mesh Networking here and why it's better than conventional options.

But the powerhouse behind the StarHub Smart WiFi mesh networking is the Nokia WiFi Beacon 1, a device that provides seamless and speedy WiFi throughout your home. Setting the device up is incredibly easy – scanning a QR code and performing a quick setup using the Nokia WiFi app is all it takes to get it going. The Beacon 1 would look great anywhere you place it too, due to its sleek white design. 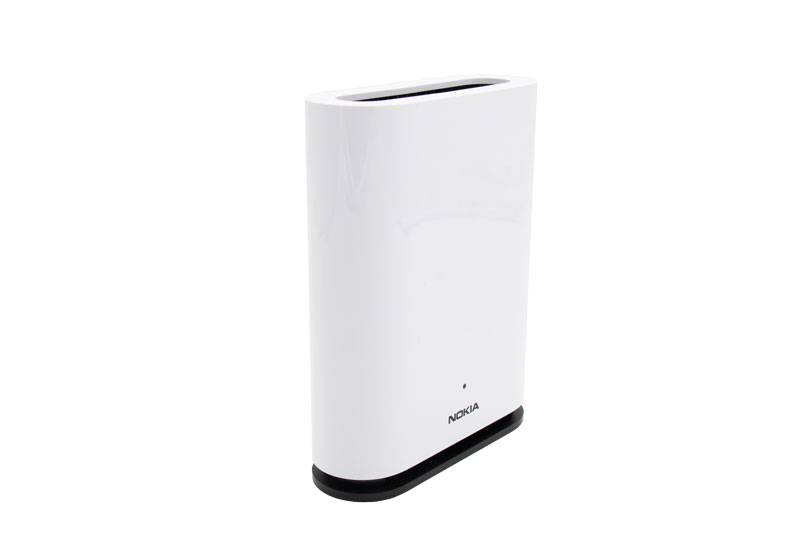 Most folks probably remember Nokia as the maker of near-indestructible phones but they tend to forget that the company has also made great strides with wireless technology in the past few years. In fact, Nokia, was the first company to have successfully demonstrated a 5G-ready network way back in 2016, and together with StarHub, even launched the first live 5G non-standalone network trial in Singapore about two months ago, with positive results to show for it.

Indeed, the long and short of it is that the Finnish MNC’s profile includes much more than just making phones. They identified mesh networking and its immense potential for connectivity a long time ago, making them a great, if not ideal partner to assist us in getting rid of such pesky issues.

4) Biting into the Beacon 1 hamburger

However, merely saying that Nokia has had a bunch of breakthroughs in mesh networking doesn’t tell you anything about the Beacon 1. So, let’s get back on topic and explore its offerings in more detail.

First up, the Beacon 1 sports a handy Smart Optimisation feature, ensuring that the data signals for your devices are always connected to the best possible channels. This translates to better performance and connectivity no matter where you are in the house and makes unwanted disconnects a thing of the past. In fact, based on a series of tests conducted by Nokia R&D, confirms that the Nokia WiFi not only sports a higher average connection speed, but is almost 20% faster in a low-connectivity situation without line-of-sight to the router. 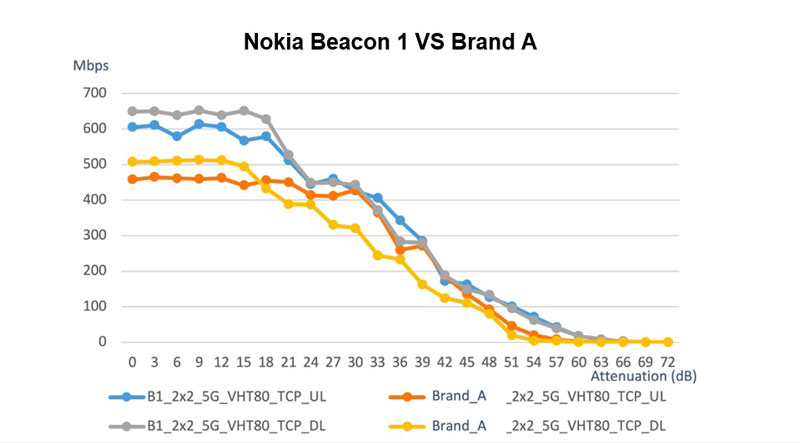 But how does this tie in with mesh networking? Simple. Speaking in terms of coverage alone, Nokia’s breakthrough router can cover a whopping 1,500sq. ft area per node as compared to some last-gen mesh networking nodes of the same class that can cover only 900sq. ft. That’s almost double the coverage, and dialing the numbers down into layman terms, it means the average three-bedroom HDB flat will only require a two-node setup to ensure excellent connectivity and no dead spots.

To further prove the coverage claims of the Beacon 1, lab tests conducted by Nokia R&D also lend weight to its capability. The below graph shows 10 devices (phones, laptops etc) connected to two units of Beacon 1 in a mesh network setup and were tested across 10 different spots within a house. The results show that the Nokia Beacon 1 mesh setup could deliver higher throughput than a competitor model across all test nodes. 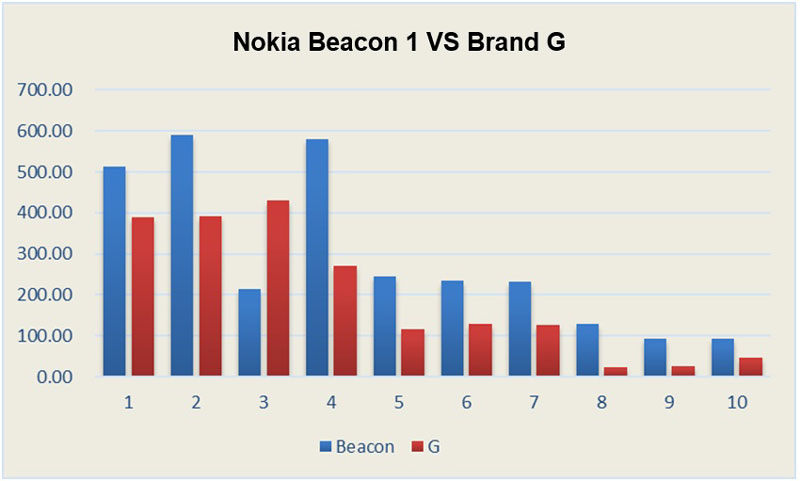 To tie in with all that, the Beacon 1 even includes Self-Healing, a function that allows it to swiftly reroute your connection and preserve your video playback no matter where you move within the house or if there’s too much interference in a particular network channel through intelligent channel analysis to switch over to a better channel – all without any user intervention.

It offers a great deal of utility in a multi-node or multi-device environment like most modern homes tend to be, and with many companies currently supporting a work-from-home format, corporate executives will find the uninterrupted transitions (less than 500ms!), especially between the 2.4GHz and 5GHz channels particularly helpful for video conferencing.

But that’s enough about work. What can the Beacon 1 do for us during our R&R sessions? For one, there’s a built-in TV streaming priority protocol, which streamlines the priority queue when you’re checking out the latest shows or films. Also, you don’t have to fret over complex-sounding terms and options. The router is easy to manage, the interface is relatively intuitive, and you can even make changes remotely through the associated mobile app!

So, you’ve got a metaphorical pen in hand and are ready to sign up for the StarHub Smart WiFi mesh networking unit, but before you go ahead and do so, we’ll do you a solid and sweeten the deal with a 10.10 exclusive bundle from StarHub.

Just for reference, a standard three-bedroom HDB flat, as we’ve mentioned above requires only two Smart WiFi units to ensure full, uninterrupted coverage at any point in the house, but you can always toss in additional units (at a special price of S$129 per Beacon instead of S$199) to suit your preferences or if you've a bigger home. This offer is only for a limited time though, so don't miss it!

Lastly, if you’re thinking of going the full mile, StarHub also has HomeHub+ packages that covers fibre broadband, StarHub TV+ entertainment, Netflix and offers the StarHub Smart WiFi for no cost too.

Our articles may contain affiliate links. If you buy through these links, we may earn a small commission.
Previous Story
Google redesigns critical security alerts for at-risk Google Accounts
Next Story
Intel confirms Rocket Lake desktop CPUs are coming in Q1 2021