According to numerous posts on a HWZ forum thread, StarHub customers appeared to have difficulties connecting to the Internet from 10PM. Areas affected include Bedok, Seng Kang, Yishun, Novena and Bukit Timah.

Update: This is StarHub's second and final update @ 12:30am: 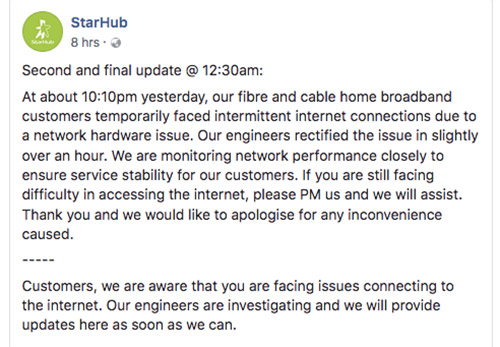 Join HWZ's Telegram channel here and catch all the latest tech news!
Our articles may contain affiliate links. If you buy through these links, we may earn a small commission.
Previous Story
Facebook is in trouble: a quick summary
Next Story
Some NVIDIA GeForce MX150 graphics cards appear to be a lot slower than others