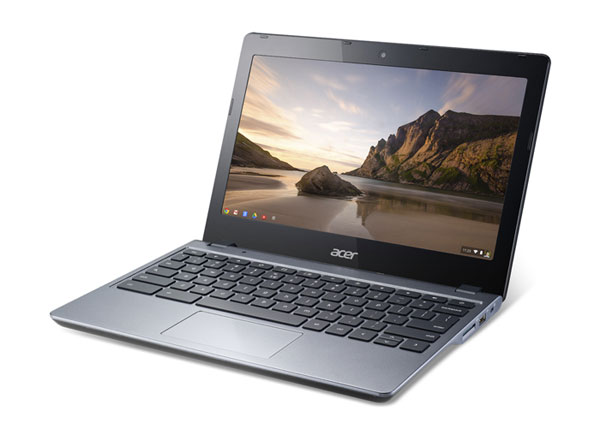 Intel has just announced that it has partnered up with local service provider StarHub, to bring the 11.6-inch Acer C720 Chromebook (its recommended retail price is $469) to Singapore.

The reason why Intel is even involved in the first place, is because the Acer C720 Chromebook sports a brand new Intel Celeron Processor (2955U, 1.4GHz) , which is part of the current generation Haswell line. This chip is slightly faster than the ARM based chips found in other Chromebooks, and enables the C720 to be faster and smoother than other Chromebooks.

However, take note that this is the lower end Acer C720, which comes with only 2GB of RAM instead of 4GB.

The C720 also comes with a proper 16GB solid-state-drive, which performs better than the usual eMMC storage used in other Chromebooks. Its SSD, along with the lightweight Chrome OS lets the C720 boot in an estimated 8 seconds.

Users who log-in to their Chromebook for the first time using their Google account, will also receive 100GB of cloud storage with Google Drive for two years, to make up for the lack of physical storage on the C720.

This portable little machine measures 19.05mm thick, weighs 1.25kg, and has an estimated 8 hour battery life, thanks to its built-in 3-cell battery.

Join HWZ's Telegram channel here and catch all the latest tech news!
Our articles may contain affiliate links. If you buy through these links, we may earn a small commission.
Previous Story
MSI Announces AE222(G) and AE201 AIO PC Series
Next Story
Hooray, Next-gen USB Plug to be Smaller and Reversible