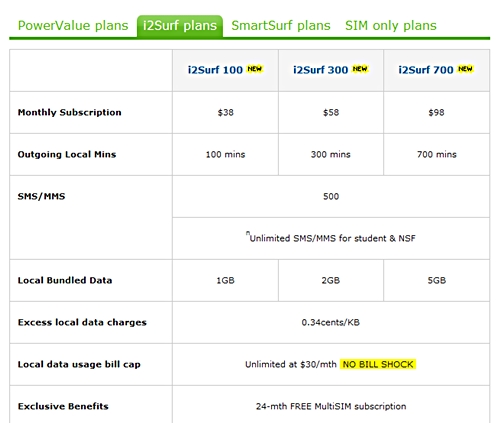 Following Singtel's LTE and mobile plan revision announcements yesterday, StarHub has likewise gone in a similar direction. A spokesperson has informed us that the SmartSurf plans (12GB and unlimited data bundled) will be discontinued in the near future. Details so as to when they will ultimately be canned still remains up in the air but until the official word is announced, new and existing customers can still re-contract on or sign up for the 3G SmartSurf plans. This will eventually leave customers with the 3G i2Surf plans which were launched more than seven months ago and will take over as StarHub's core post-paid plans. These plans range from offering 1GB to 5GB worth of data but are bundled with a $30 data price cap and a free 24-month multiSIM service. This is of course, done in anticipation of the upcoming LTE network by StarHub in key business areas such as Singapore Changi Airport, Marina Bay, Suntec, and Shenton Way later this year.

Cassie Fong, StarHub’s Senior Manager of Corporate Communications - "We are building our LTE network, which is expected to go "live" in key business areas (E.g.: Singapore Changi Airport, Marina Bay, Suntec, and Shenton Way) later this year. As previously shared, we will not offer unlimited LTE data plans. More details about our LTE devices and services will be announced later."

More details of the i2Surf plans can be found here.

Join HWZ's Telegram channel here and catch all the latest tech news!
Our articles may contain affiliate links. If you buy through these links, we may earn a small commission.
Previous Story
LG, Toshiba, and AUO to Settle LCD Panel Price-fixing Case
Next Story
Rumor: AMD to Commence Production of Next-Gen FX CPUs in Q3 (Update)