Stardew Valley is getting a major content update in late November

Stardew Valley is getting a major content update in late November 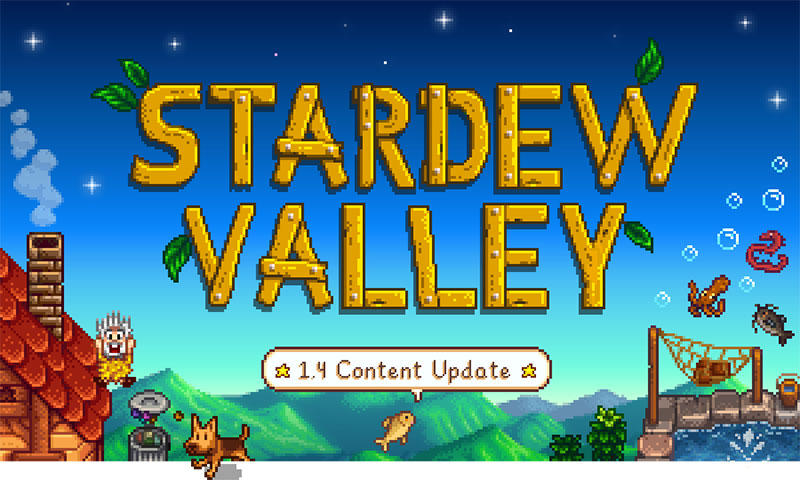 Eric “ConcernedApe” Barone has just posted a blog regarding the current state of Stardew Valley, along with details on upcoming updates. The Stardew Valley creator sets the stage for a slew of updates that will be dropping very soon, and it looks like there's a lot to look forward to.

More importantly, Barone also provided more details for an upcoming update on PC. The 1.4 free content update will reportedly provide polish and quality of life improvements to all existing aspects of the game. Some of the changes include an upgrade to the Wild Bait item used for fishing, which Barone says was "essentially worthless" before, along with new in-game events for married life.

Barone was otherwise tight-lipped about other updates, mostly because he wants to preserve the element of surprise for players and let them experience the content themselves. However, he has posted teasers for content updates in the past on Twitter, so the 1.4 update isn't exactly a huge secret.

Farmers will now be able to exercise more independence in their multiplayer games. A new farm map called “Four Corners” is mentioned, along with a “separate money” option which will allow players to split money among themselves instead of simply dipping into a shared pool of money.

The second tweet teased an entirely new facility, the fish pond. This will provide players with a new option to collect fish beyond just fishing. Farmers can raise fish in these ponds, along with collecting eggs from them.

In addition, keen-eyed farmers will spot many unstated new things in the images Barone tweeted. New customisation options such as clothes, haircuts, and hats can be seen. On top of that, it appears that different breeds for cats and dogs will now be available. Unfamiliar items such as a jukebox and a shed with a completely different design from the ones currently in-game have also been spotted.

The 1.4 update will come to PC on 26 November. Console patches are currently being tested and updates for the console releases will be provided at a later date.

Previous Story
Is your wallet ready? LG's world's first 8K OLED TV is now available
Next Story
Intel reveals its first Nervana chips made for AI in the cloud