Stanford University and Samsung have created a 10,000 PPI meta-OLED display

Stanford University and Samsung have created a 10,000 PPI meta-OLED display 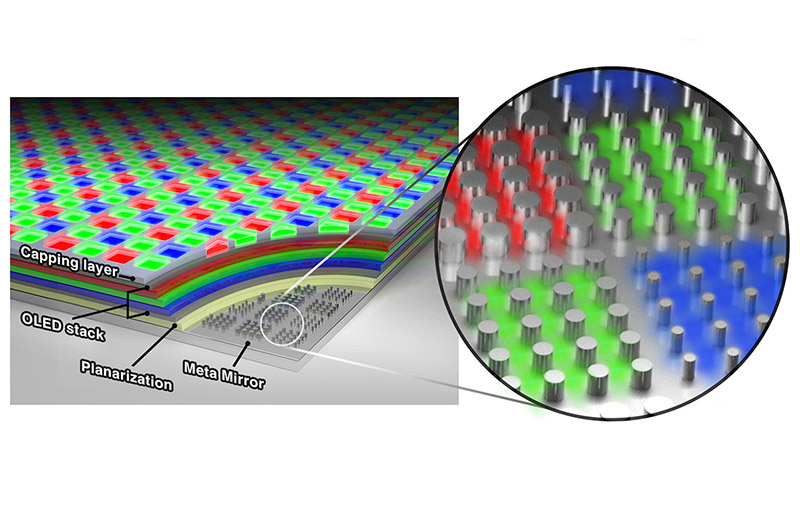 Stanford University has announced that its materials scientists have collaborated with Samsung Advanced Institute of Technology (SAIT) to create a new OLED structure that will enable the display’s resolution to go up to 10,000 pixels per inch (PPI), blowing past the 500 PPI the best smartphone OLED today is capable of.

Briefly, the secret sauce behind this new tech is an ‘optical metasurface’, a reflective metal base layer with nanoscale corrugations. Acting like super-tiny mirrors, they manipulate the reflective properties of light to build up their resonance in the pixels for more effective light extraction. It’s like an acoustic chamber but for light, if you will. This interaction with light at the nanoscale is an expansion of an ultra-thin solar panel design research done by the university’s materials scientist Mark Brongersma.

In lab tests, the researchers successfully produced miniature proof-of-concept pixels. Compared with color-filtered white-OLEDs (which are used in OLED televisions) these pixels had a higher color purity and a twofold increase in luminescence efficiency – a measure of how bright the screen is compared to how much energy it uses. They also allow for an ultrahigh pixel density of 10,000 pixels-per-inch.

According to the report, Samsung is already working on integrating this tech into a full-size display. While the research claims a simpler manufacturing process (e.g., each sub-pixel in a flat RGB-OLED can now be of the same height), I don’t think we’d see it in large-screen OLED TVs anytime soon. Since breakthrough displays have traditionally started small, this is more likely to make it into VR or AR headsets first.