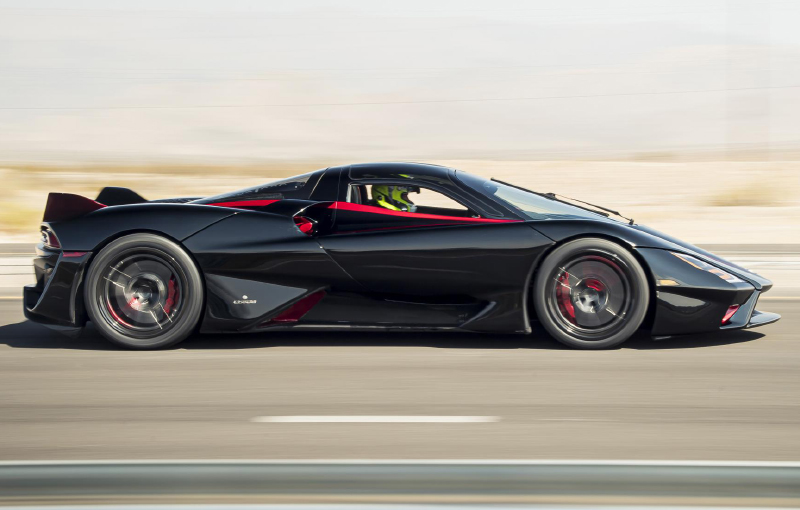 Shelby Supercars (SSC) has just broken the world record for the fastest production car in the world with the Tuatara.

The Tuatara managed a two-way average of 316.11mph (508.73km/h) on a closed seven-mile stretch of road somewhere outside of Las Vegas.

In doing so, the SSC Tuatara comfortably beat the Bugatti Chiron which managed a certified maximum speed of 304.773mph (490.42km/h) just last year.

In what must be considered a win for the good old combustion engine, the SSC Tuatara is powered by a twin-turbocharged 5.9-litre V8 that puts out 1,750hp. The body is carbon fibre and was designed to be as slippery as possible, with a drag coefficient of just 0.279. The entire car weighs just 1,247kg.

Perhaps the most impressive thing about this feat was that it was done on public roads, with significant crosswinds, and on street tyres with non-race fuel.

Also, look at the video above and see just how fast the Tuatara was accelerating from 400km/h to 500km/h. There looks like there's more in the tank.

Oliver Webb, the driver who piloted the Tuatara to this record-breaking achievement, said:

There was definitely more in there. And with better conditions, I know we could have gone faster, as I approached 331 mph, the Tuatara climbed almost 20mph within the last five seconds. The car wasn’t running out of steam yet. The crosswinds are all that prevented us from realising the car’s limit.

Now that SSC has put its Tuatara to the test, all eyes are on the Koenigsegg Jesko, whose creator Christian von Koenigsegg said would be capable of speeds over 300mph.

Join HWZ's Telegram channel here and catch all the latest tech news!
Our articles may contain affiliate links. If you buy through these links, we may earn a small commission.
Previous Story
The gold iPhone 12 Pro is said to have a more durable stainless steel frame
Next Story
Call of Duty: Warzone's Halloween event adds Zombie Royale and horror skins