Spider-Man: Miles Morales will let you go into battle with a very protective cat

Spider-Man: Miles Morales will let you go into battle with a very protective cat 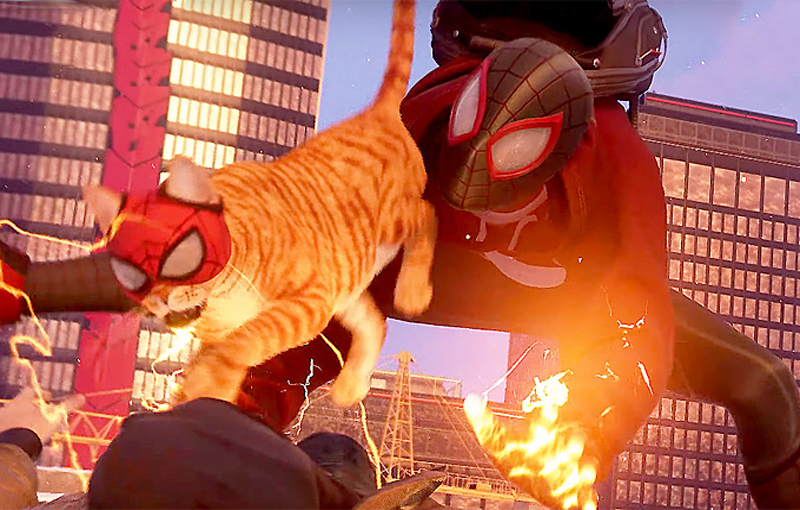 Spider-Cat does whatever a spider can.

Spider-Man: Miles Morales is less than a month away from release, and we’re already seeing exciting footage of the game make its way to the internet. You have the usual web-slinging ray-traced fare of course, but the most exciting thing we’ve seen so far? Miles’ new Spider-Cat.

According to Game Informer, one of the game’s missions will have you help out a recently-robbed bodega owner. The mission takes Miles Morales over to an abandoned building where he clears out a warehouse full of bad guys and rescues a cat - also named Spider-Man. Spider-Man then stuffs Spider-Man in his backpack and sends the cat back to its owner.

The full mission can be viewed below:

Your reward for saving the cat is an excellent skin, where Miles puts on a sweater and carries Spider-Cat (who wears an adorable red mask) with him into battle. The cat isn’t just a cosmetic addition, either. As seen at the end of Game Informer’s video, Spider-Man (the cat) jumps out and attacks enemies during Miles’ finishing moves! As if I wasn’t going to pick this game up already.

Bodega cats are a very New York-y thing. These small convenience stores inexplicably always house a cat, and seeing them in Spider-Man: Miles Morales just dials up the immersion. In the words of the game’s narrative designer Evan Narcisse, “Had to have a bodega. Had to have a bodega cat.”

Game Informer has also released more gameplay from Spider-Man: Miles Morales, including its first boss. Miles has to fight a returning enemy from Marvel’s Spider-Man - take your guess on who it is: