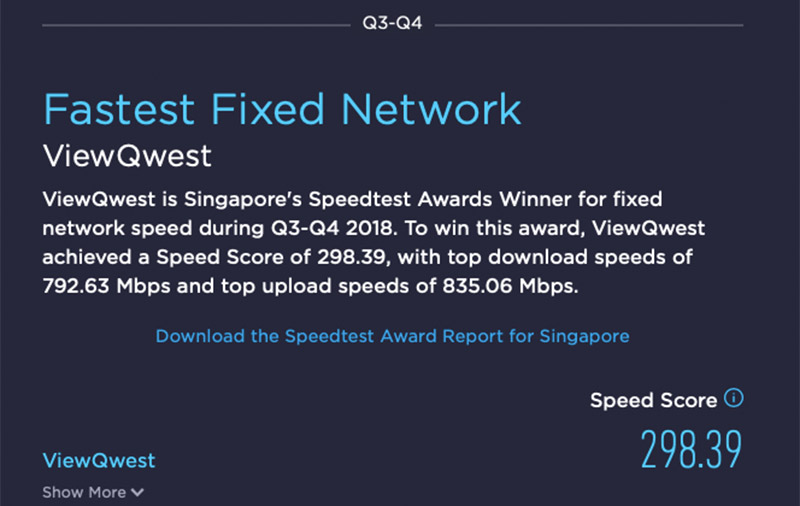 Local fiber broadband service provider ViewQwest, which has been pretty quiet in the market for the past year, has just been named Singapore’s fastest internet service provider (ISP) for fixed network speed.

This “Fastest Fixed Network” accolade came by way of Speedtest’s latest report, which measured the operators over a 6-month period in Q3 and Q4 2018. According to the report, ViewQwest tops the chart with a “Speed Score” of 298.39. In more concrete terms, during this period, ViewQwest hit a top download speed of 792.63 Mbps and a top upload speed of 835.06 Mbps.

Ookla, which owns Speedtest, also tested several other operators, including Singtel, StarHub, and M1. Interestingly, the network that comes in second place behind ViewQwest is MyRepublic, which managed a top download speed of 581.38 Mbps during the same period. Singtel, StarHub, and M1 are ranked third, fourth, and fifth respectively.

For what it’s worth, Ookla analyzes results from user-initiated tests taken with Speedtest to come out with its awards. For this particular report (PDF), over 2.4 million tests from 510,906 users were considered. With the smallest test count (123,411) and user count (28,787), one could perhaps reason that ViewQwest had the speed advantage because its network wasn’t as saturated as the other operators. Still, credit where credit’s due.

Finally, while Ookla doesn’t have the results for past years' awards, in its May 2017 market report, the company also rated ViewQwest as being the fastest broadband provider in Singapore.

Join HWZ's Telegram channel here and catch all the latest tech news!
Our articles may contain affiliate links. If you buy through these links, we may earn a small commission.
Previous Story
Your next device could support up to 100W charging
Next Story
Jabra's two new Elite headphones, Jabra Elite 85h and Jabra Elite Active 45e are coming soon!