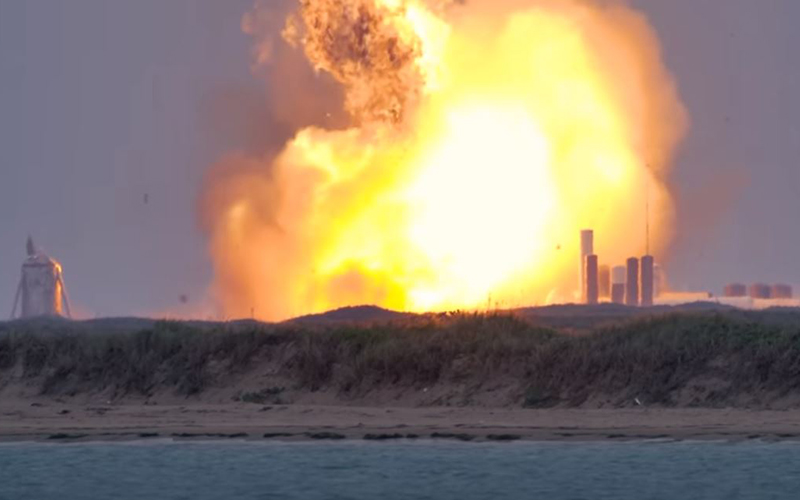 A prototype of SpaceX's Starship, a giant heavy-lift rocket, exploded during a static fire test of its Raptor engine on Friday. The Starship SN4 prototype launch vehicle went up in a fiery conflagration on the test stand in Boca Chica, Texas, marking the fifth time SpaceX has run a static fire test over the last two weeks.

SpaceX hopes to eventually use Starship to replace its Falcon 9 and Falcon Heavy rockets, but Starship remains in the very early stages of development, whereas the Falcon rockets have proven their reliability in multiple flights. The company wanted to move on to fly the SN4 prototype for short distances after static fire testing, but it's clear that won't be possible now as the vehicle appears to have been completely destroyed in the explosion.

That said, this isn't the first time one of SpaceX's Starship prototypes has met a dramatic end — three earlier test vehicles have also succumbed during pressurised tests that caused them to either burst or implode. This particular prototype got further along in the testing process, but it doesn't seem like anything will be salvageable at all.

SpaceX's goal is to one day use Starship to send people and cargo to deep space destinations like the Moon and Mars.

The explosion comes just a day before SpaceX is scheduled to launch two NASA astronauts to the International Space Station aboard its Crew Dragon capsule, which will be fixed on top of its Falcon 9 rocket. The failed test is unrelated to the launch, and SpaceX CEO Elon Musk has said that he plans to put a pause on Starship development to focus on its first crewed flight.

Join HWZ's Telegram channel here and catch all the latest tech news!
Our articles may contain affiliate links. If you buy through these links, we may earn a small commission.
Previous Story
League of Legends: Wild Rift looks pretty amazing
Next Story
Four new colours of Powerbeats Pro will be available from 9 June