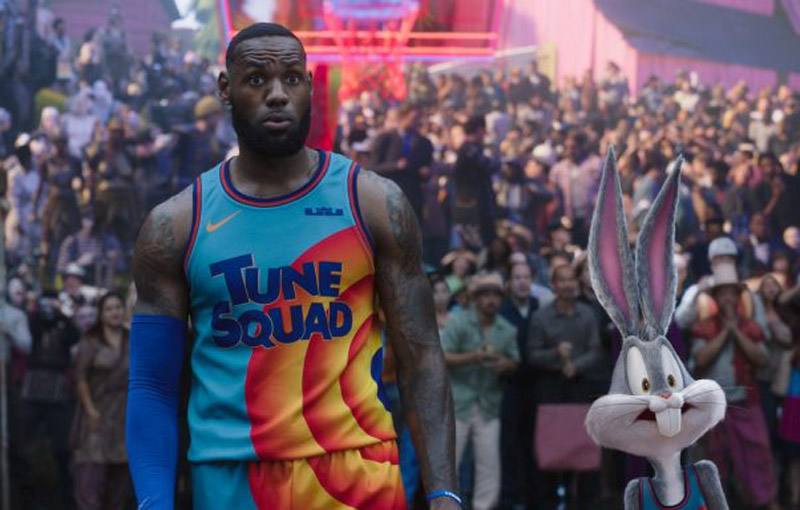 Warner Bros. Pictures have released a new trailer for Space Jam: A New Legacy, a sequel to the 1996 cult classic that brings iconic Looney Tunes characters back to the big screen alongside LeBron James. Unexpectedly, the basketball movie is also turning out to be a massive crossover between a bunch of other Warner Bros. properties. The trailer alone has Pennywise the Dancing Clown and dragons from Game of Thrones.

When LeBron and his young son Dom are trapped in a digital space by a rogue A.I., LeBron must get them home safe by leading Bugs, Lola Bunny and the whole gang of notoriously undisciplined Looney Tunes to victory over the A.I.’s digitized champions on the court: a powered-up roster of professional basketball stars as you’ve never seen them before. It’s Tunes versus Goons in the highest-stakes challenge of his life, that will redefine LeBron’s bond with his son and shine a light on the power of being yourself. The ready-for-action Tunes destroy convention, supercharge their unique talents and surprise even “King” James by playing the game their own way.

Essentially: LeBron James and his son get trapped in a digital world by a rogue AI played by Don Cheadle, and have to win a high-stakes basketball game to escape. To do this, the father-son duo assembles a team of superstar Looney Tunes characters: Bugs Bunny, Daffy Duck, Lola Bunny, Tweety Bird, Yosemite Sam, the Tasmanian Devil and more. They’ll go against the Goon Squad, an intimidating team of baddies.

Here’s the funny thing, though. The movie takes place in a digital space called the ‘Warner 3000 Entertainment Server-verse’, which consists of characters and worlds from tons of other familiar WB properties like the DC Comics universe, Mad Max, Game of Thrones, Pacific Rim and more. The trailer’s practically a Where’s Waldo game of familiar faces hiding in crowds, from the Night King and Iron Giant to the Mask and the Scooby-Doo gang. King Kong even makes an appearance, and right after his own movie too.

So it's basically Ready Player One, but with basketball this time. Space Jam: A New Legacy will hit theaters and HBO Max on 16 July, 2021.

Join HWZ's Telegram channel here and catch all the latest tech news!
Our articles may contain affiliate links. If you buy through these links, we may earn a small commission.
Previous Story
The Apple Arcade's biggest expansion yet brings it up to 180 different titles, including Fantasian
Next Story
It's official: LG Mobile business is no more