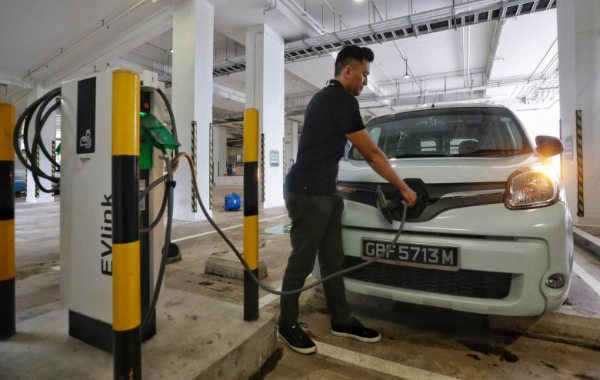 This article is contributed by Adrian Lim and first appeared in The Straits Times, an SPH publication, on 20 June 2018, Wednesday.

The points will be placed at housing estates, shopping malls, industrial sites and business parks, the firm announced yesterday.

While others such as Greenlots, Red Dot Power and BlueSG are already in the market, SP Group said its network will be the largest one fully accessible to the public.

More than 100 of the charging points will be of the direct current type with a 50 kilowatt power rating that can fully charge a vehicle in as little as 30 minutes.

SP Group said there are fewer than five direct current charging points here now. Most points use alternating current, and a lower 7.4kw rating, which takes the car about seven times longer to be fully charged.

An app will allow motorists to pay for charging electronically while also getting updates on the availability of charging points.

Details on pricing will be disclosed closer to the end of the year, when SP Group sets up its first 30 charging points. These will be a mix of the alternating current and direct current types.

There were 592 electric and plug-in hybrid cars on the road here as at the end of last month, about 0.1 per cent of the total car population of 613,383. There are also 31 electric-powered goods and commercial vehicles.

"There is a chicken-and-egg conundrum when it comes to electric vehicle adoption... Many prospective drivers are concerned about the lack of a pervasive charging network," said Mr Goh Chee Kiong, head of strategic development at SP Group. He added that some have "range anxiety" - the fear that the electric vehicle will run out of battery in the middle of a journey.

Owners tend to install their own charging points if they live in landed properties or get their condominium management to have stations set up, said Mr Terence Siew, president of the Electric Vehicle Association of Singapore. There are 30 condos with charging points.

There will be more public choices available down the road.

Charging infrastructure specialist Greenlots operates 16 publicly accessible charging stations, with aims to lift that to 50 by the end of this year.

Electricity retailer Red Dot Power announced a partnership in February with PlugIT, a Finnish charging technology specialist, to install at least 50 charging stations by the end of next year.

BlueSG, which runs an electric vehicle-sharing programme, aims to build 2,000 charging points by 2020, and make 400 of them available to the public.

While electric vehicles are generally more costly than a comparable combustion engine car, Mr Siew said this will change as battery prices drop over the next few years due to mass production and economies of scale. "Electric vehicles will be cost competitive with normal cars," he added.

Dr Sanjay Kuttan, programme director of Nanyang Technological University's Energy Research Institute, said the SP Group's initiative should help to spur the adoption of electric vehicles, but the charging points must be well distributed and accessible.

While there will be a combined 1,000 public charging points by 2020 - which could support between 2,000 and 10,000 vehicles - there must also be "one common consolidated payment system, across all infrastructure" regardless of which firm owns the points, Dr Kuttan added.