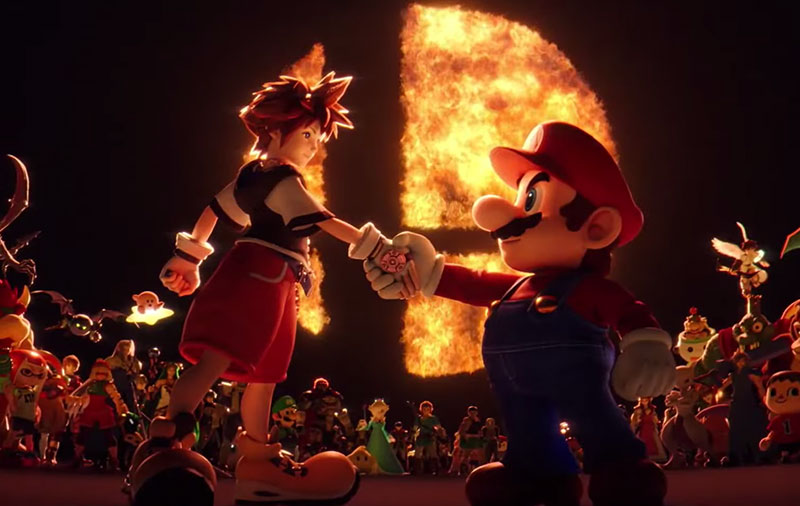 The veil was lifted once the keyblade and iconic mouse logo showed up.

After almost three years since its release, Super Smash Bros. Ultimate has finally completed its roster of 82 fighters (omitting echo fighters) with the inclusion of Kingdom Hearts’ protagonist, Sora.

Announced in the final ‘Mr. Sakurai Presents’ livestream, a series of Super Smash Bros. Ultimate broadcasts hosted by the game’s director Masahiro Sakurai, Sora was originally at the top of the Smash Bros. Fighter Ballot conducted in 2015, the winner of which was never revealed until now.

Sora becomes the game’s final DLC fighter and last of its Fighters Pass Vol. 2 collection of DLC characters. The reveal fulfils Sakurai’s promise of the collection's six characters being unveiled before December 31 2021.

As usual, Sora will come with multiple colour variations based on different Kingdom Hearts games, totalling eight costumes. If you’re curious, there weren’t any overt Disney character appearances in the game demos, though other Kingdom Hearts characters like Riku and Aqua will cameo as Spirits and in stage backdrops.

Speaking of which, a significant setting in Kingdom Hearts, Hollow Bastion, accompanies Sora as a new stage. As the timer ticks down, the stage will transform into a backdrop inspired by Kingdom Hearts’ Dive to the Heart, featuring a stained glass panel cycling through characters from the game’s cast. Nine new Kingdom Hearts songs will also join the release. Interestingly, a tenth song, a swing version of the iconic Dearly Beloved theme, will appear as a bonus song if your system has save data from Kingdom Hearts: Melody of Memory.

Sora will arrive as a DLC character on October 18, for USD$5.99, or automatically downloaded if you own Fighters Pass Vol. 2. The new Mii Fighter costumes will also arrive on October 18 separately, for USD$0.75 each. Details about the release of the Kingdom Hearts games for Switch will be revealed at a later date.

Join HWZ's Telegram channel here and catch all the latest tech news!
Our articles may contain affiliate links. If you buy through these links, we may earn a small commission.
Previous Story
Squid Game fans were literally fighting to get into Netflix's pop-up store in Paris
Next Story
JBL launches Charge 5 speaker and Tour Pro+ TWS earbuds for its 75th anniversary