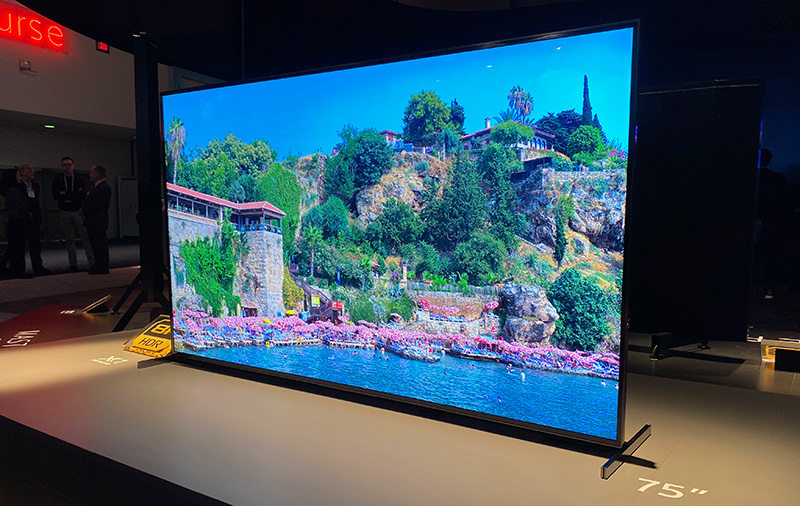 OLED aside, Sony’s flagship LED-LCD TV this year (for now) is the Z8H, which offers an 8K resolution and is available in 75- and 85-inch screen sizes. Update: I've been informed by Sony that only the 85-inch Z8H is coming to Singapore.

A direct LED-lit TV that does full-array local dimming (no peak brightness number is given, but I think it should easily zip past 1,500 nits), the Z8H continues to use Sony’s best TV processing chip, the Picture Processor X1 Ultimate. But the bigger story here is the TV’s new Acoustic Multi-Audio technology that vibrates the tweeter in the frame to produce sound (I kid you not). Coupled with a one-slate design where the screen goes from edge to edge, the Z8H is able to offer a very similar picture-aligned, sound-from-picture effect as the Acoustic Surface Audio tech found on Sony’s OLED models.

Also onboard is Sony’s X-Wide Angle tech. While this has adversely impacted contrast on past TVs, it remains to be seen how this viewing angle improvement feature behaves on the 2020 models.

Otherwise, the Z8H shares many features with Sony’s other premium TVs: it runs Android TV, works with Amazon Alexa (availability varies by region — I'm told it's not applicable to Singapore sets), supports Apple AirPlay 2 and HomeKit, has a TV Centre Speaker Mode that turns the built-in speaker into a centre channel for use with an external speaker system, and supports Dolby Vision and Dolby Atmos. And like the 2020 OLED TVs, it has an Ambient Optimisation feature that will automatically adjust picture brightness based on the ambient light in the room.

Even though the Z8H isn’t part of the Master Series, like last year’s Master Series Z9G, it supports HDMI 2.1. But this is still a partial implementation: you get eARC, 4K/120Hz and 8K/60Hz support but not VRR (variable refresh rate) and ALLM (Auto Low Latency Mode). Since Sony has a habit of introducing new TVs twice a year, I suspect there would be a Master Series Z9H later this year with (hopefully) full HDMI 2.1 support.

Design-wise, the Z8H comes with a two-position stand that lets you place the TV on smaller cabinets. There’s a hands-free feature that lets you find what you want to watch by just talking to the screen; and the bundled brushed aluminium remote control now has backlit buttons.

Pricing for the Sony Z8H 8K LCD TV isn’t available at the moment. In fact, it’s unclear if the Z8H would even come to Singapore. For what it’s worth, last year’s Z9G never made it here.

Update, Feb 28: Added info that Sony Singapore is only going to carry the 85-inch model and that Alexa support isn't available for local sets.

Join HWZ's Telegram channel here and catch all the latest tech news!
Our articles may contain affiliate links. If you buy through these links, we may earn a small commission.
Previous Story
Apple may release a GaN USB-C charger with 65W fast charge this year
Next Story
NVIDIA's GeForce Now will let you play Cyberpunk 2077 on launch day