Note: This article was first published on 7th October 2021 and it now has a local price update. 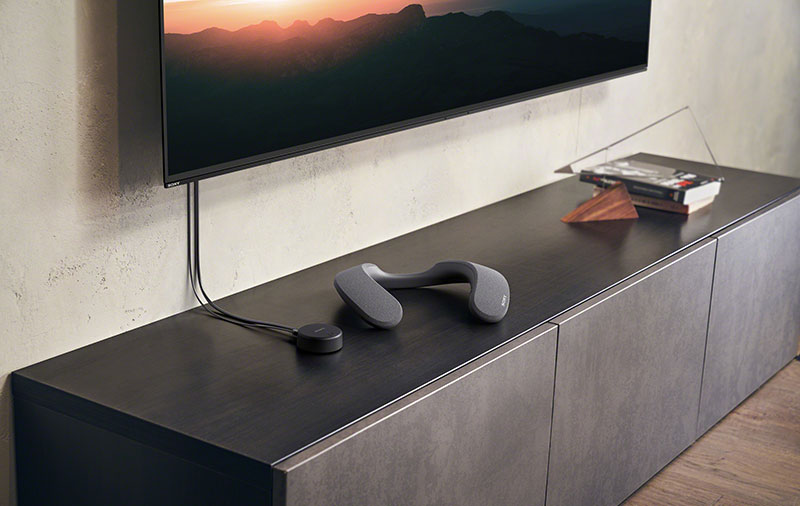 No stranger to wireless immersive speakers, Sony has announced the SRS-NS7 wireless neckband speaker with Dolby Atmos, with the goal of bringing that immersive audio up close and personal.

The SRS-NS7 comes with a WLA-NS7 wireless transmitter in the box and setting everything up is pretty simple. For TV content, you’ll want to connect the WLA-NS7 to your TV with an optical and USB cable, and pair your speaker with it through Bluetooth 5.0. It’s worth noting that the transmitter works best with Sony’s Bravia XR TVs, as the transmitter’s delay minimisation and personalised Dolby Atmos functions are only activated when connected to a compatible Bravia TV. That said, the SRS-NS7 and WLA-NS7 will still work with other TVs – just without the lag minimisation technology.

For laptop and handheld devices, the process is even simpler, as you’ll only need to pair the speaker to your device through Bluetooth.

Together with Bravia XR TVs, the SRS-NS7 and WLA-NS7 can deliver Sony’s 360 Spatial Sound when watching Dolby Atmos movies. This can be controlled using the 360 Spatial Sound Personalizer app. Additionally, the SRS-NS7 also supports 360 Reality Audio for music, compatible with music services such as Deezer and TIDAL for your smartphone. However, note that this feature is only coming sometime in January 2020 through a firmware update.

The SRS-NS7 is driven by what Sony calls its ‘X-Balanced Speaker Unit’ in an upward-facing configuration that's meant to increase sound pressure to reduce distortion. There are also passive radiators for bass and low-frequency content, and the speaker also comes with support for SBC, AAC and LDAC audio codecs. It also has some quality-of-life features as well, including a flexible band at the back for added comfort and adjustability, and built-in microphones for calls, with echo cancellation to decrease feedback from the speakers. The SRS-NS7 also features the ability to connect to two devices at once, called Multipoint Connection, as well as an IPX4 splash-proof rating. The packaging is also less than 5% plastic, which might please customers who are environmentally conscious.

Finally, the battery for the SRS-NS7 is rated for up to 12 hours, though that depends on volume, temperature and usage conditions, with Sony claiming up to 5 hours at maximum volume. The SRS-NS7 also has a USB Type-C port for charging, with 10 minutes of charging time giving you up to an hour of battery life.

Though Sony’s 360 Spatial Sound application is also compatible with select headphones (provided you already own the WLA-NS7 transmitter), we imagine this to be a better option if you don’t want to lose awareness of your surroundings, due to its open-ear design, That said, it might mean this isn't something you'd want to bring out on the bus or train.

The SRS-NS7 will be available for the Asia Pacific region in November 2021. Singapore will have it available in Sony physical stores and their online store for S$399. The listing is out on Sony Singapore's website right now as 'Available soon', if you want to take a closer look at the new product.

The WLA-NS7 wireless transmitter will also be sold separately in November, and though pricing isn't known, you can take a look at the listing here.

Join HWZ's Telegram channel here and catch all the latest tech news!
Our articles may contain affiliate links. If you buy through these links, we may earn a small commission.
Previous Story
The first episode of Riot Games' Arcane will be open for co-streaming exclusively on Twitch
Next Story
Elden Ring has been delayed to 25 Feb next year but is planning a Closed Network Test in Nov