Sony today announced a broadened and deepened lineup of 4K-capable equipment that will simplify the creation of a wide variety of 4K productions.

Following the introduction of Sony’s F65 CineAlta camera which features an 8K CMOS sensor, the entire 4K workflow from shooting and editing through to viewing was achieved with a full lineup of 4K products. Also, earlier this year Sony announced the launch of the 84-inch Bravia 4K LED TV for consumers, complementing its award-winning 4K VPL-VW1000ES home cinema projector. 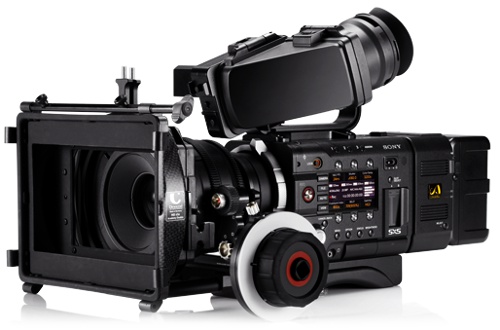 The F55 can be connected to the 4K 30-inch LCD monitor, PVM-X300, using four 3G-SDI interfaces for 4096x2160 up to 60p live monitoring while recording XAVC 4K and for the playback of XAVC 4K images. Similarly, it is also possible to connect directly to Sony’s new 84-inch BRAVIA 4K LED TV for large-screen monitoring of the camera’s 4K 60P images (at resized horizontal resolution of 3860 pixels).

Representing Sony’s second generation of cost-effective PL mount prime lenses, each is certified for 4K capture, while minimising geometric distortion, vignetting and breathing. A 9-blade iris delivers beautiful bokeh and the focus rings rotate 240°. The new lens series includes focal lengths of 20, 25, 35, 50, 85 and 135 mm. For easy lens changes, each has the same T2.0 aperture, the same external diameter, matte box diameter, and gear locations for follow focus and aperture. All are the same height except for the 135 mm.

Shooters can use still lenses by removing the supplied PL-mount adaptor to reveal the native FZ mount. This makes it easy to accept commercially available adaptors for third-party lenses, including Canon EF, Canon FD, Nikon DX, Nikon G, Leica M and even 2/3-inch broadcast B4 lenses. A third option is the use of Sony FZ-Mount lenses with auto focus servo zoom (such as the SCL-Z18X140.)

Sony is also unveiling the AXSM Access Memory System for 2K*/4K RAW recording, based on Sony’s unique recording technology. Optimised for this new platform is the AXSM memory card (512 GB capacity, model AXS-512S24), using the generic file system exFAT. Users can record 4K RAW data up to 60 fps and 2K RAW up to 240 fps, with a 300MB/s sustained transfer speed. PC-friendly operation is enabled through use of the AXS-CR1 Card Reader, offering a USB 3.0 interface for high speed transfer.

Additionally, the new AXS-R5 RAW recorder directly docks onto the F5 and F55, for an extremely elegant and compact recording solution for 2K and 4K RAW recording.

Delivering advances in ergonomics specifically requested by working cinematographers, the F5 and F55 can be fitted with Sony’s newest shoulder rig for extra stability and comfort in shoulder-mount applications. The rig is sturdy, lightweight and uses industry-standard rosettes on both sides for quick and easy attachment of third-party hand grips and other accessories.

The new cameras are planned to be available in APAC in February 2013.

Sony today revealed that it is at an advanced stage of developing the HXR-IFR5 interface unit, allowing the Full-HD Super Slow Motion NEX-FS700 camcorder to capture stunning 4K RAW movie footage with the AXS-R5 RAW recorder. The announcement reinforces Sony’s intent to bring 4K RAW acquisition to a wider range of users than ever before.

The NEX-FS700 camcorder features a state-of-the-art 4K Super 35 Exmor CMOS sensor (total 11.6 million pixels). With an optional firmware upgrade, the NEX-FS700 will be able to output 4K bitstream data over 3G HDSDI. The HXR-IFR5 interface unit has a 3G HD-SDI input and will transfer the 4K RAW data to record onto the Access Memory Card in the AXS-R5 Recorder.

The HXR-IFR5 and the NEX-FS700’s optional firmware upgrade are planned to be available in APAC between April and June in 2013.