Note: First published on 26th March 2019, we now have pricing and availability details. 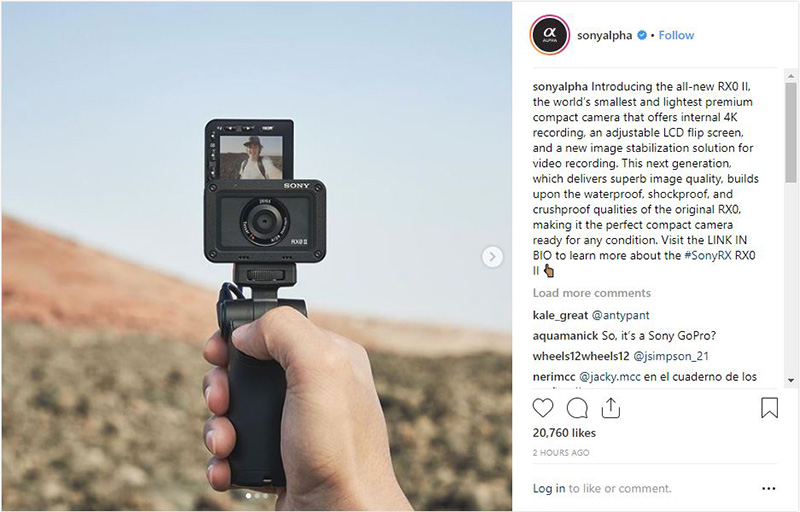 Just posted on Sony's sonyalpha Instagram account is this announcement about the new RX0 II - an ultra-compact selfie-friendly pocket camera for all sorts of impromptu use.

As you can see, it now improves upon the original with a new adjustable flip screen LCD that you can use for selfies, and is obviously still waterproof, shockproof and crush-proof. According to the website, the RX0 II is also IP6X dustproof, and it now features a 15.3MP stacked CMOS sensor paired with the latest version of their BIONZ X image processing engine. 4K movies can also be recorded at up to 4K30p resolution internally with no pixel binning.

Interval recording has been added too, so you can perform continuous shooting with a set interval between 1 and 60 seconds to edit your footage into a time-lapse movie on the PC using Sony's Imaging Edge desktop application. There's also a new electronic image stabilization (EIS) feature for more stable handheld movies, and that's improved by using Sony's new Movie Edit add-on app, which allows you to control the amount of image stabilization, modify the aspect ratio of the video and post to multiple social media platforms from a single video file.

It's available now at all authorized Sony resellers for S$899, which is $100 less than the debut price of its predecessor. Also, check out all the accessory prices for the RX0 II to plan your budget appropriately.

To find out more about how we felt about the RX0 II, we've a quick hands-on article from the media launch event to give you a firsthand account of our experience.

Join HWZ's Telegram channel here and catch all the latest tech news!
Our articles may contain affiliate links. If you buy through these links, we may earn a small commission.
Previous Story
Apple Watch sent emergency services to the aid of 80-year-old woman after fall
Next Story
Hacker accessed some Outlook.com accounts for three months